If you drive along the A26 highway from Besalu to Olot, then on the right side of the viaduct there is a breathtaking view of the small town located at the very edge of the high cliff – Castellfollit de la Roca. “Small” is even loudly said. According to official figures, the city is on the list of the smallest settlements in Spain with an area of less than 1 square kilometer. According to this parameter, it is the smallest in our province of Girona, and the second among the smallest in all of Catalonia. The city is not young, the first mentions are dated by the XI century.

Basalt rock, on which Castellfollit is located – of volcanic origin; moreover, in the process of tectonic shifts, it turned over and was squeezed out of the earth’s crust upside down. At the foot of the cliff, two streams converge – Fluvia and Turonell. Knowledgeable people say say that in this place there is a serious intersection of the magnetic field lines of the earth, so the place posesses a tremendous energy. So do not miss your chance to splash in the stream of a mountain river, open the chakras and cleanse karma😊.

We invite you to a small virtual walk around the city with us. 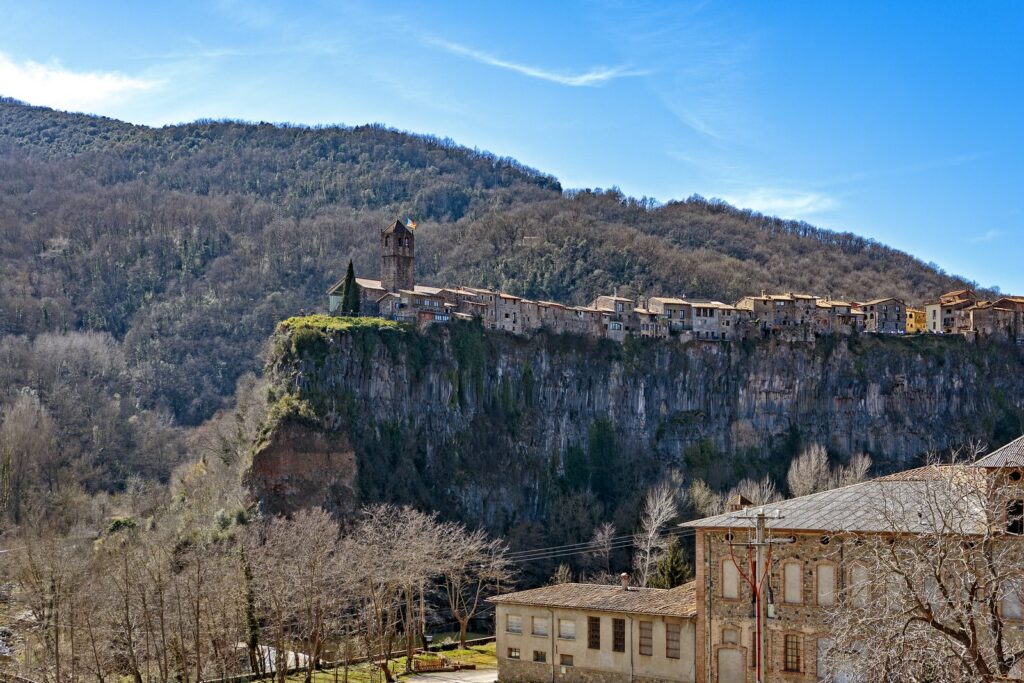 View of the city from the first observation deck at the entrance to the municipalty.
*** 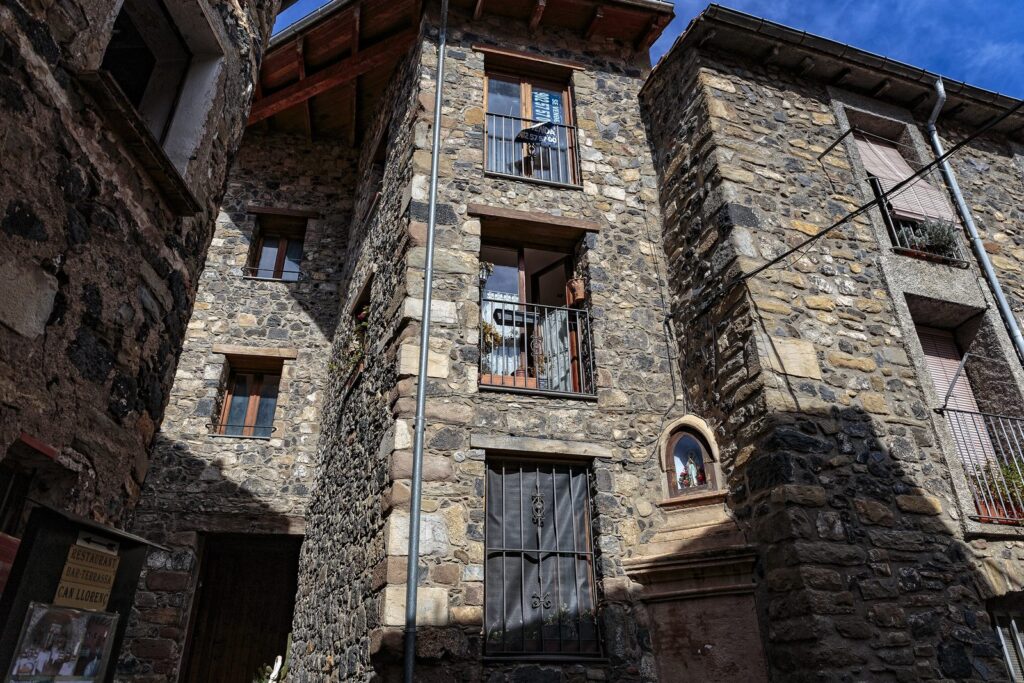 We make our way along the narrow medieval streets of the city to the edge of the cliff.
*** 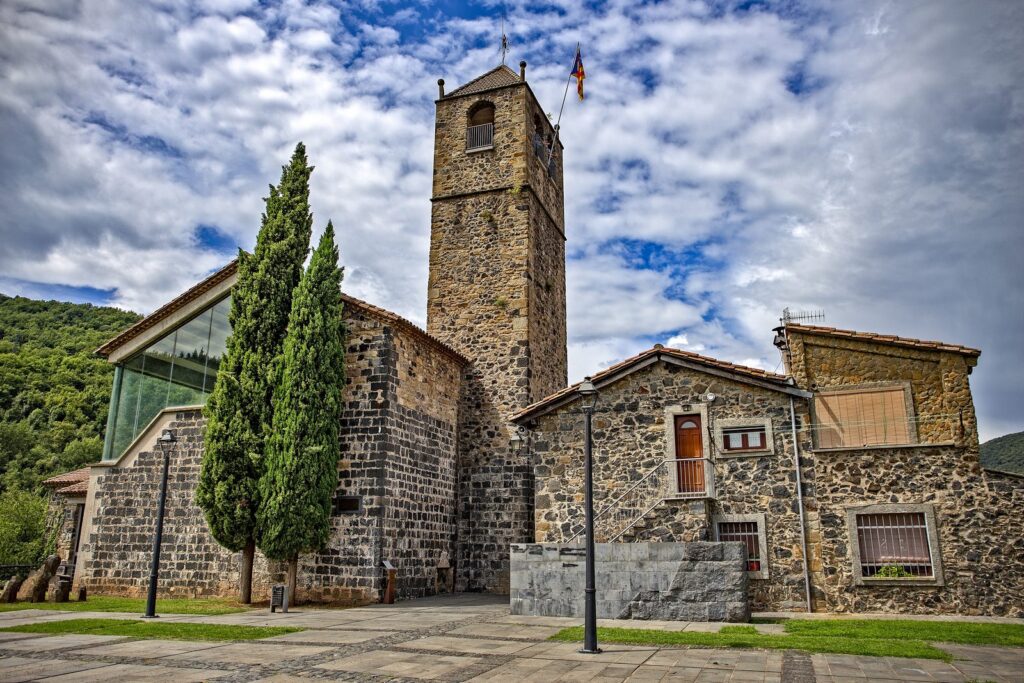 The church of San Salvador, the first mention of which dates back to the 13th century, rises above the edge of the cliff. It offers breathtaking views of the city and surroundings.
*** 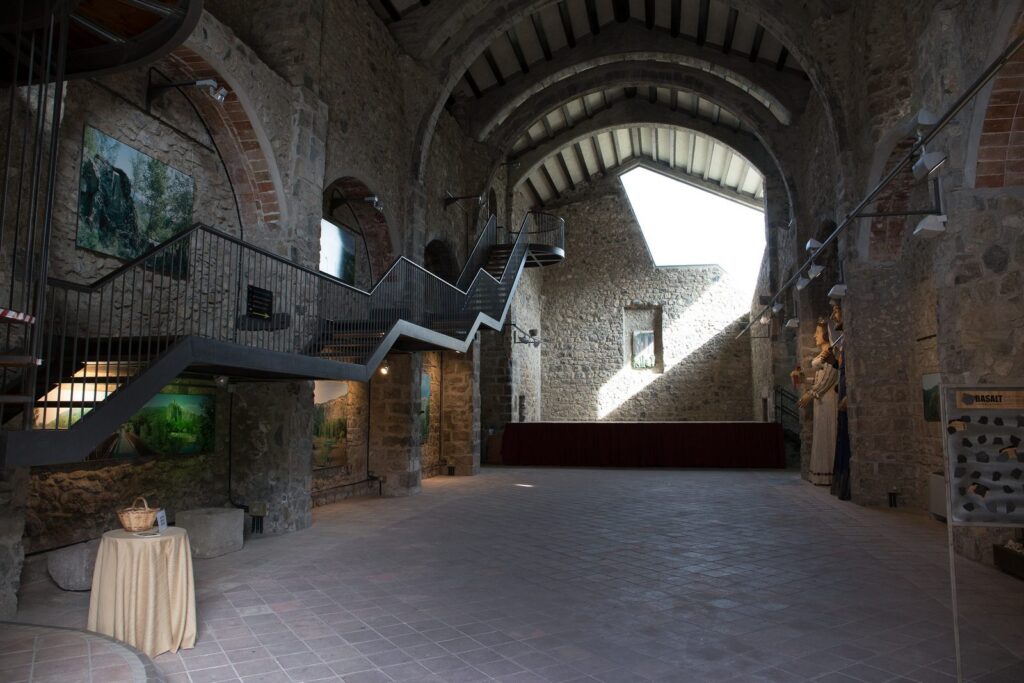 A convenient staircase has been laid under the arch of the church for respected tourists to access the bell tower.
*** 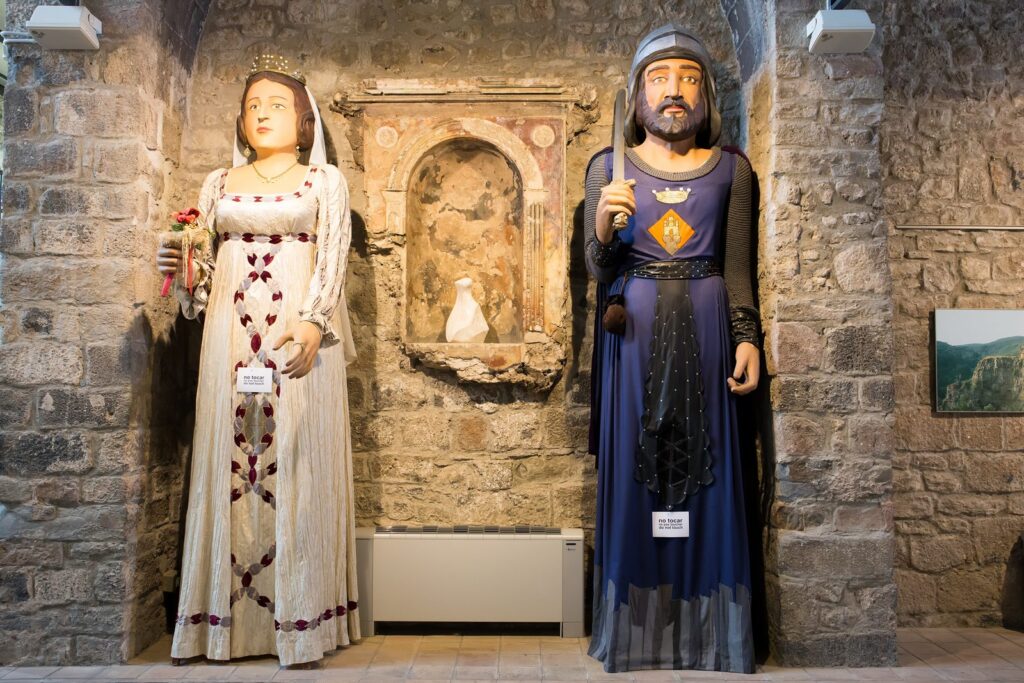 We already wrote about the most interesting Catalan tradition and the processions of giant dolls in Girona and Barcelona. Castellfollit de la Roca also has its own giant dolls, and they are stored in the church. The giants in the photo were created in 1996, their names are Rock and Barbara (Roc i Bàrbara), because that’s what the residents of the city wanted, choosing these names from a large list by popular vote. 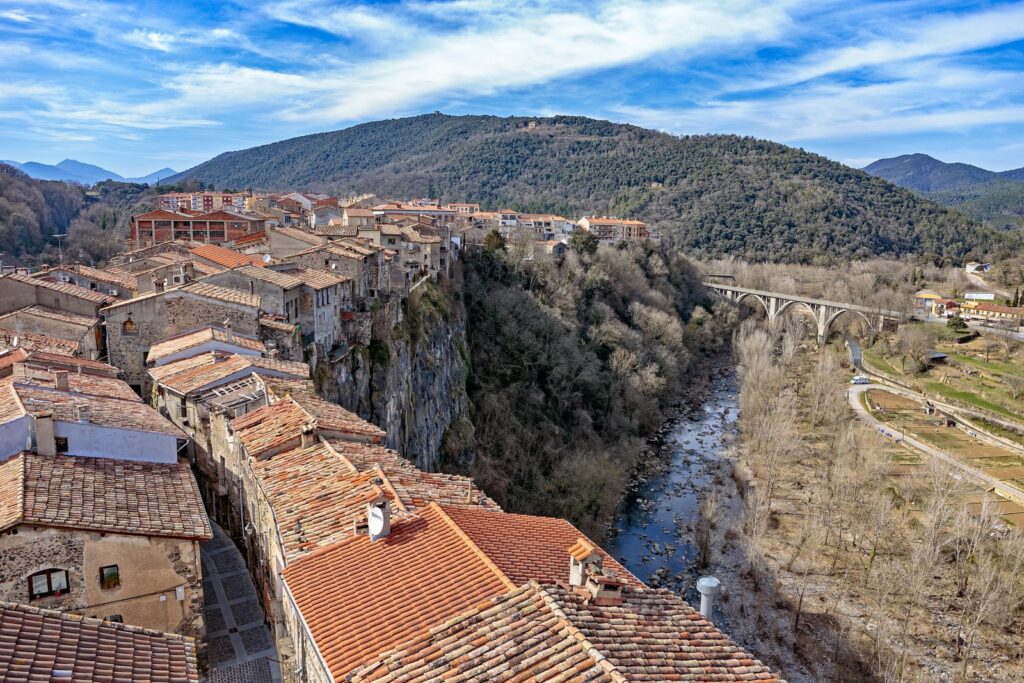 And we finally climb to the top of the church bell tower and enjoy the view of the city rooftops.
*** 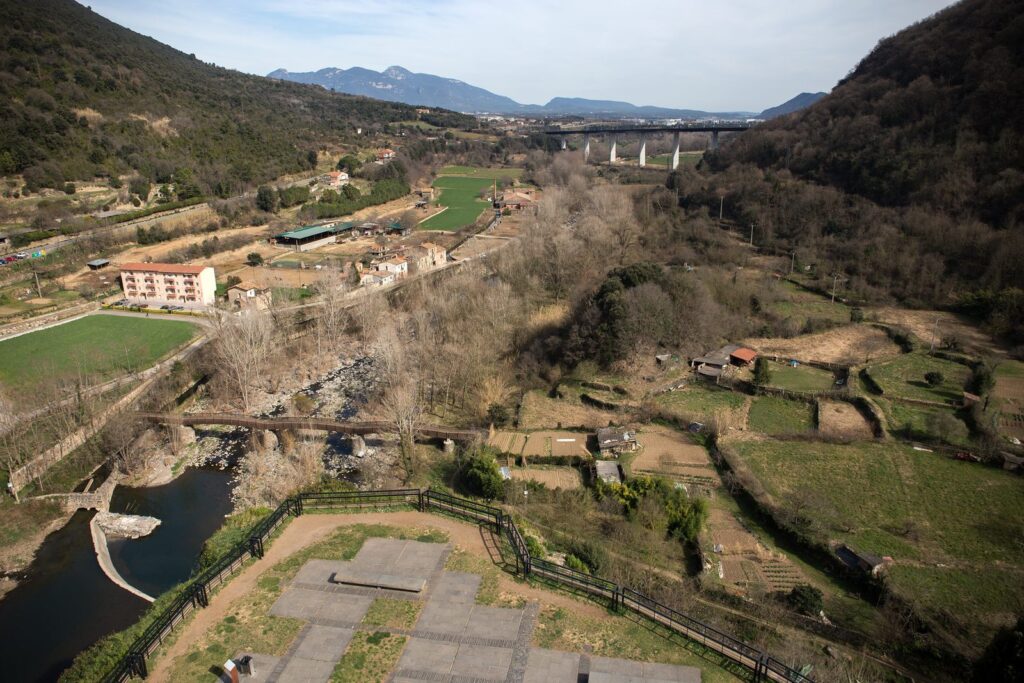 View from the bell tower to the confluence of the Fluvia and Turonell rivers. In this place a wooden pedestrian bridge is thrown across the rivers, this is where we will go. In the background is the magnificent flyover of the A-26 highway leading from Besalu to Olot.
*** 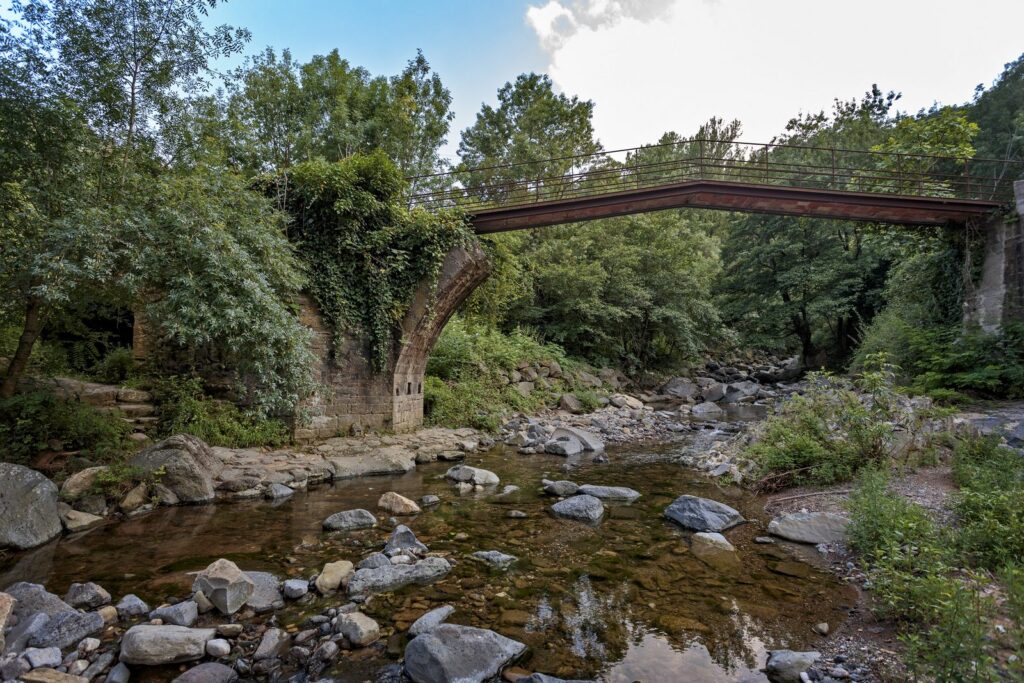 In order to go down to the river, you need to follow from the church down the winding street Carrer de la Font. On the way, you will need to cross the Turonell River through an iron bridge. It is located on the site of the medieval bridge that once existed here, which was built between the 14th and 16th centuries. Unfortunately, a severe flooding on April 3, 1970 destroyed the bridge almost to its very foundations; Today, only part of the support on the right bank has been preserved from the bridge. 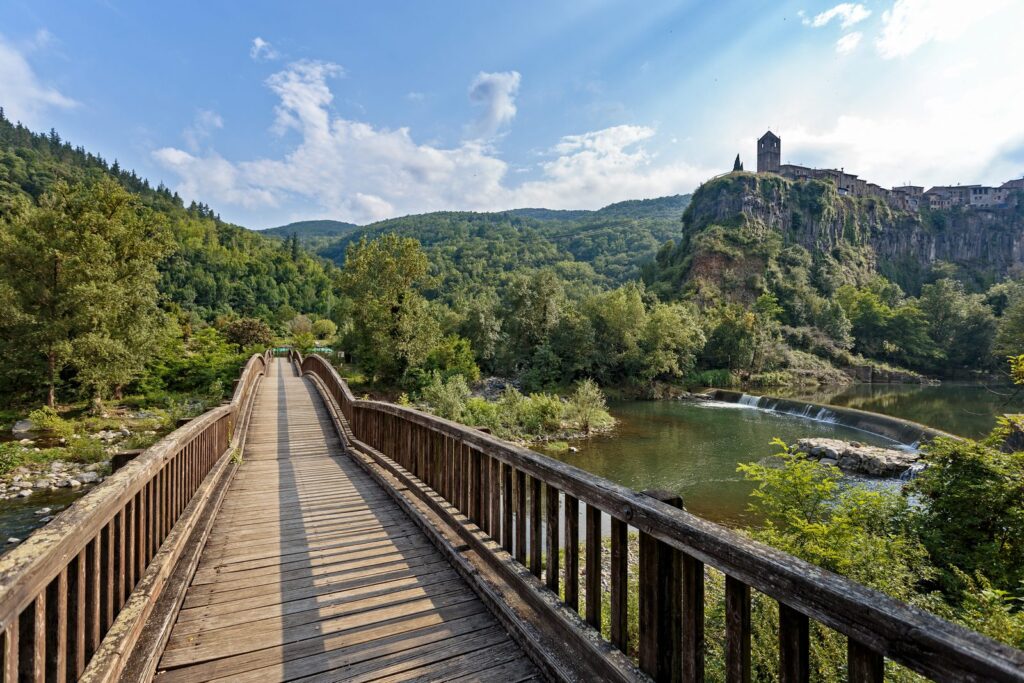 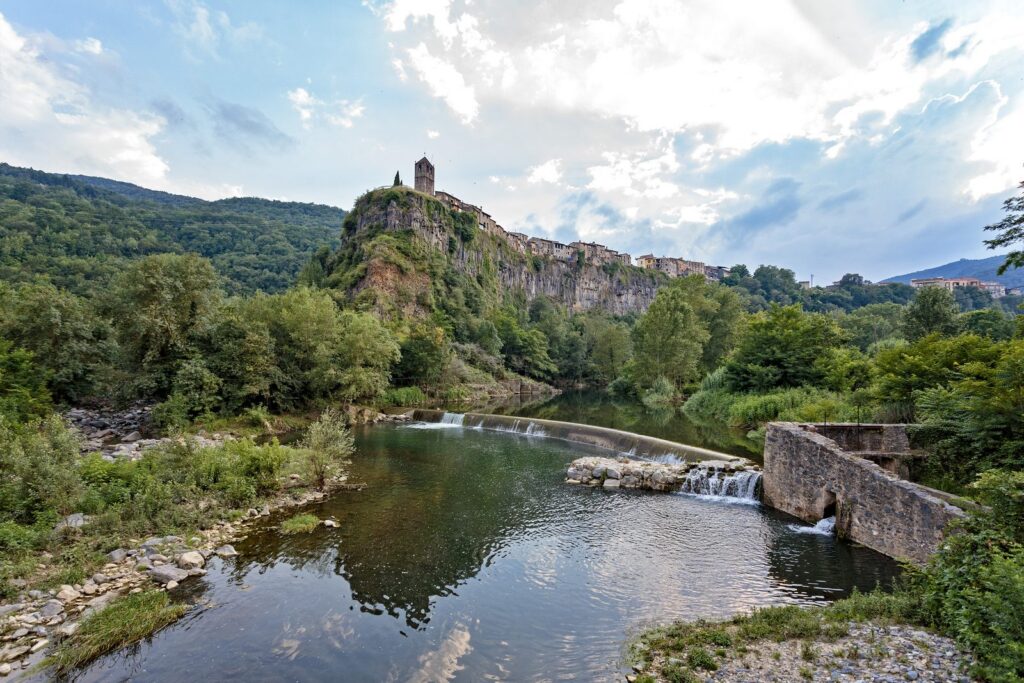 The bridge offers gorgeous views of the city on a cliff.
*** 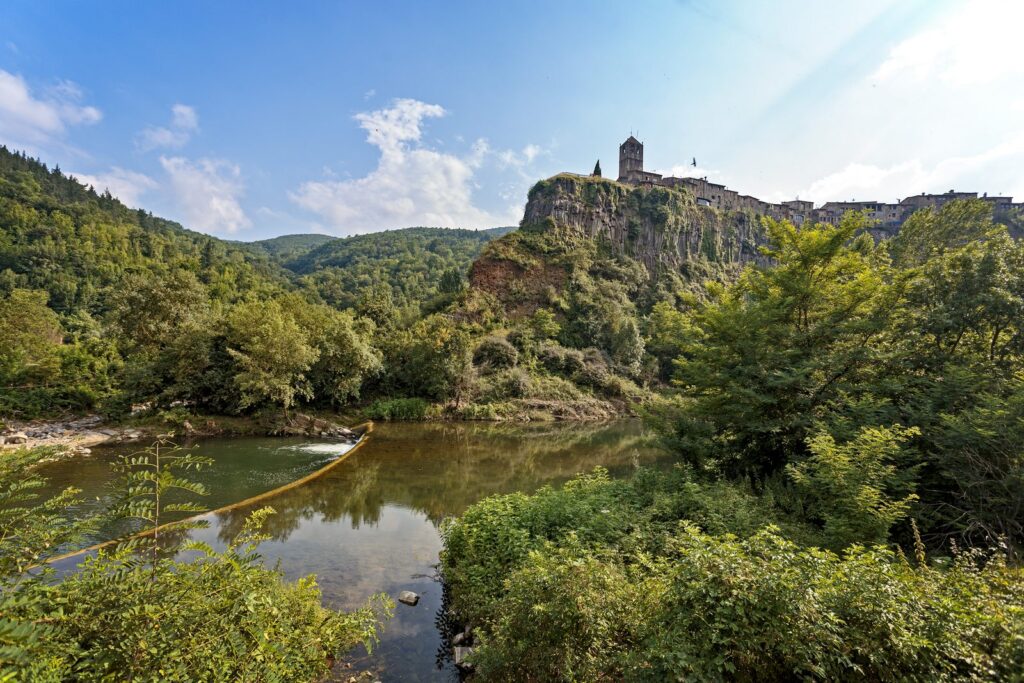 Finally, we take another photo of the city and continue our journey through Catalonia, feeling pacified and energized!

More photos of the city can be viewed on the link in our blog. Contact us if you need help organizing an excursion to Castellfollit de la Roca.
Share this post
Tags: None