Vall de Nuria in the summer

Author: admin
Categories: Points of interest
In the summer, when the merciless heat of August descends on the homes of civilians in Spain, even we, the residents of the Costa Brava, sometimes want to plunge into the coolness, but not into the coolness created by air conditioner, no – to plunge into the real coolness of the thin air of the Pyrenees, to enjoy the sound of mountain streams and to soak our feet into a cooling freshness of the mountain lake… At such moments we go to Vall de Núria; just 1h 35 minutes by car on the C-25 highway past the Montseny Natural Park, and then another 40 minutes of ascent on the “cremallera” – the cog railway – and you are in the realm of greenery and freshness!
We invite you to take a virtual walk to the Vall de Nuria valley, a real oasis in the middle of the summer heat.
The first photo shows the view that opens from the train window at the moment when it emerges from the last tunnel to the surface in the Vall de Nuria. 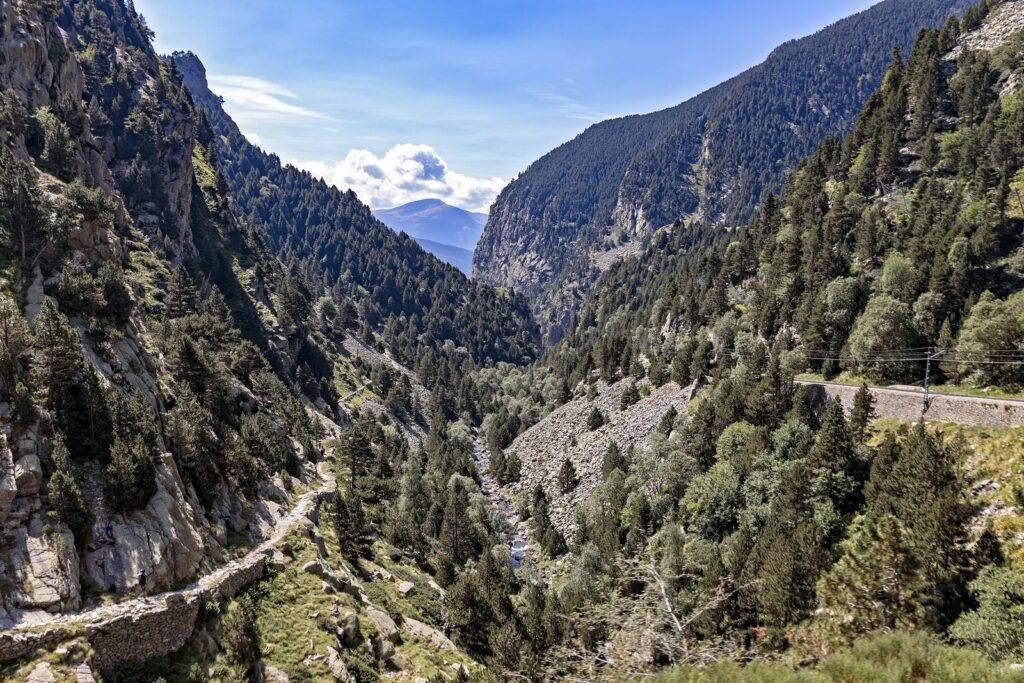 Climbing the mountain starts from the town of Ribes de Freser. You probably have seen the Aigua de Ribes water bottles – it is produced here, using the purest water from mountain streams. The road goes up along the narrow gorge along which the Nuria stream flows; this stream is flowing out from an artificial lake in the valley of the same name. The difference in height between Ribes de Freser and the Nuria Valley is about 1 kilometer. You can climb into the valley on foot along the walking trail (in the left of the photo), or by the train of the “cremallera” cog railway (in the right of the photo).
*** 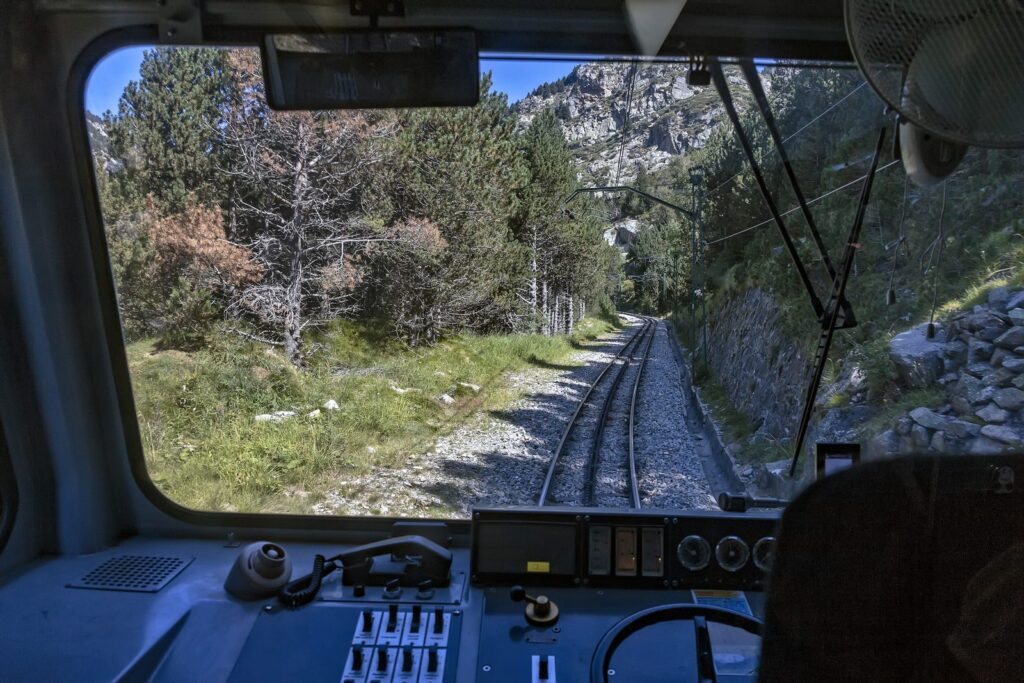 On foot – this is for real athletes! We prefer a calmer cremallera train journey, it’s much faster😊. The climb on the train takes about 35-40 minutes instead of a few tiring hours on foot. The central rail with teeth is clearly visible in the photo, along which the train slowly climbs uphill.
*** 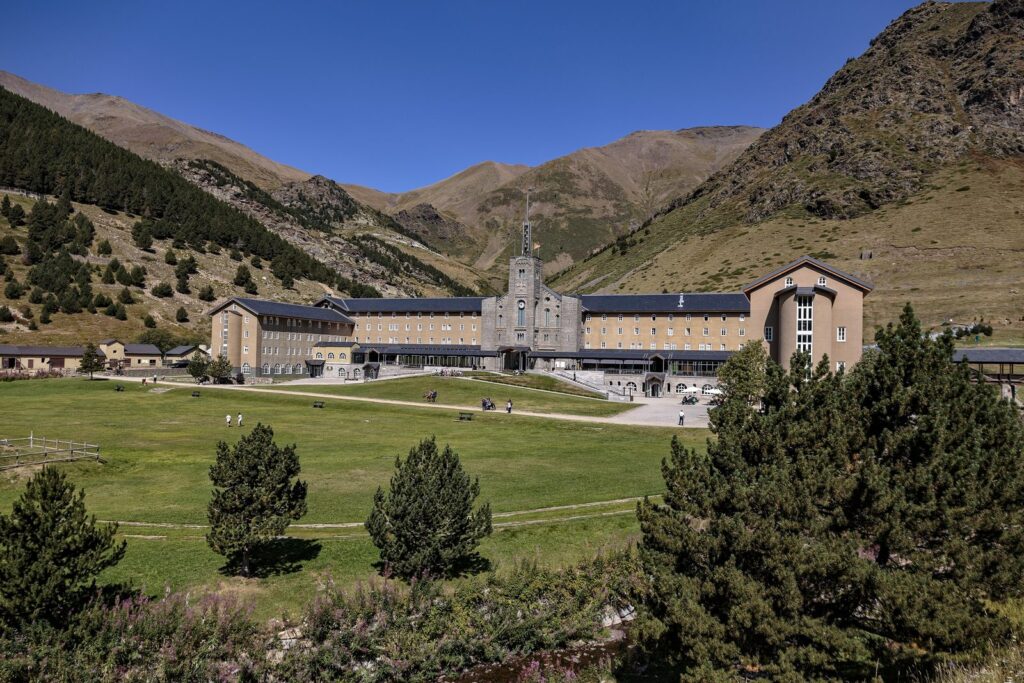 We admire the mountain slopes and man-made buildings – the Basilica of the Virgin of Nuria (in the center), as well as the buildings of a three-star hotel and apartments. In ancient times, itinerant pilgrims stayed here for the night, nowadays tourists stay here looking for new adventures.
*** 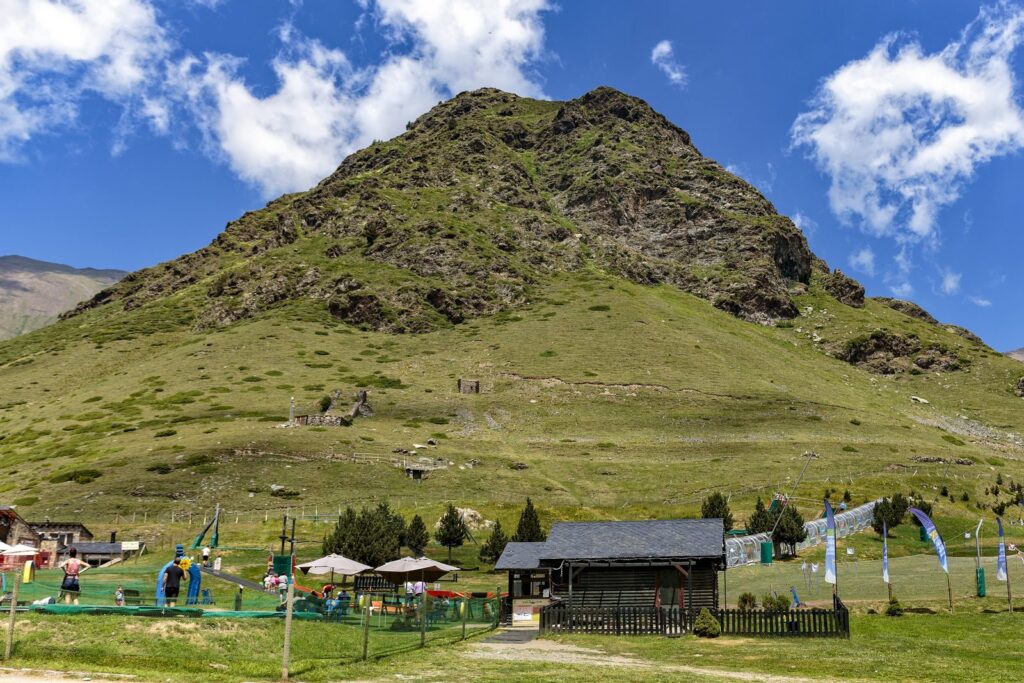 If you travel with children, you can neutralize them for a long time by sending them to the El Cau de la Marmota children’s amusement park. Here they will be able to jump on trampolines, slide down the hill on an inflatable donut, ride a bike, roll down on a scooter and do many things more; they will be having fun for at least an hour! For adults, the choice is huge – you can either join the children or relax in the shade, watching your fun offspring. 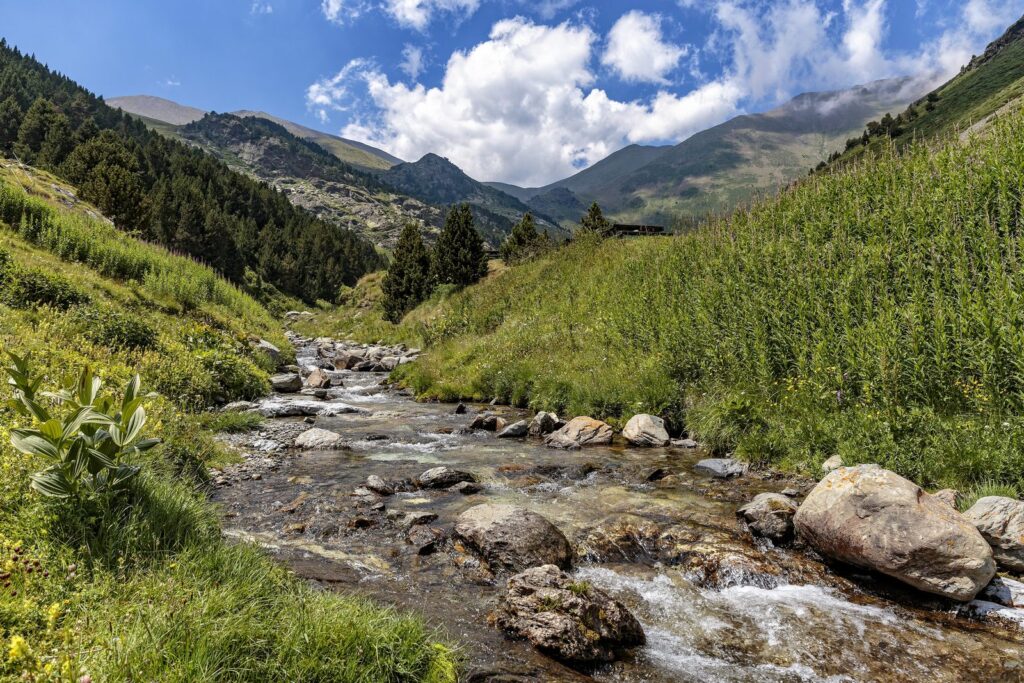 You can go for a walk and enjoy the murmur of the Torrent de Finestrelles mountain stream. The water in the stream, as expected, is cold and delicious in taste.
*** 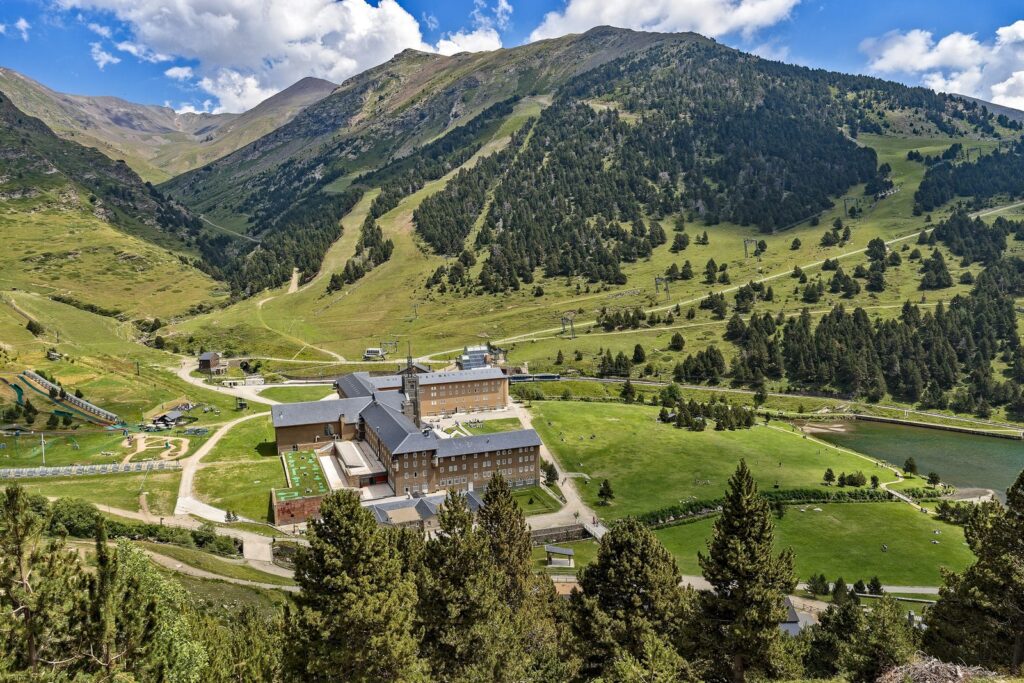 You can climb the trail up to the observation deck and enjoy panoramic views of the valley and mountains.
*** 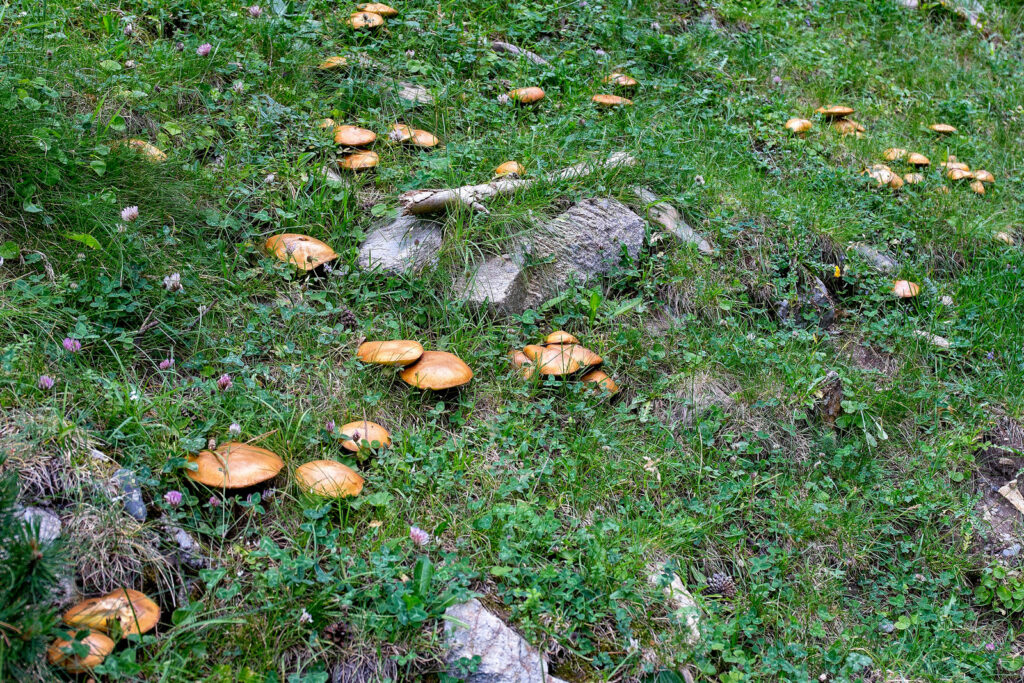 You can collect a couple of baskets of mushrooms, abundantly growing on the mountain slopes.
*** 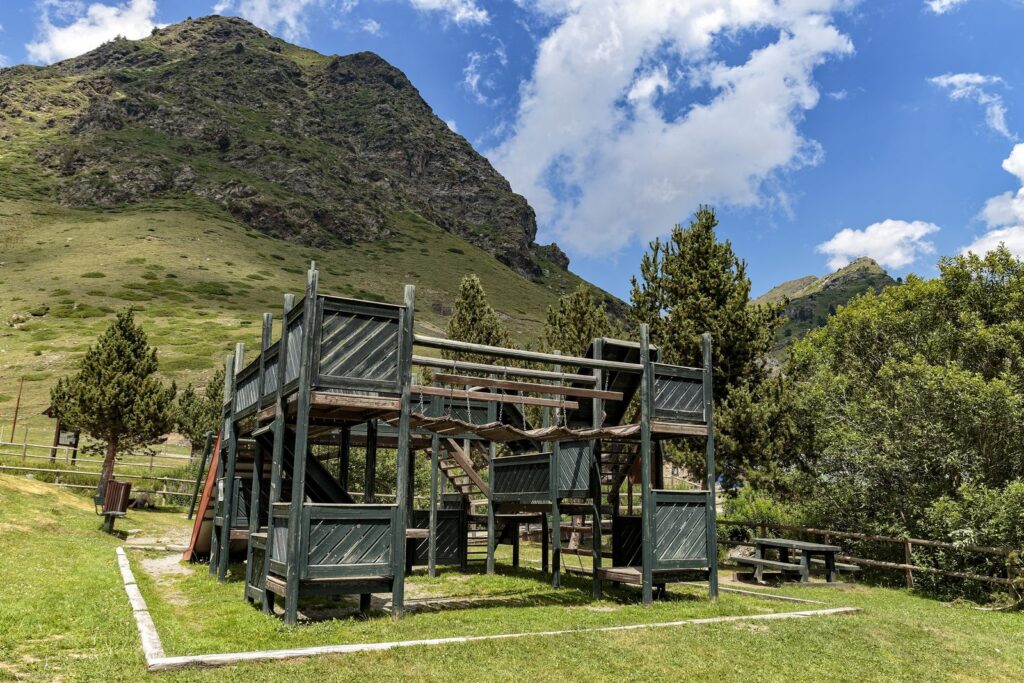 A small playground. Nearby are very conveniently located tables – you can have a picnic, and then lie in the shade of trees. The most important thing – do not forget to grab a bottle of cold champagne from home!
*** 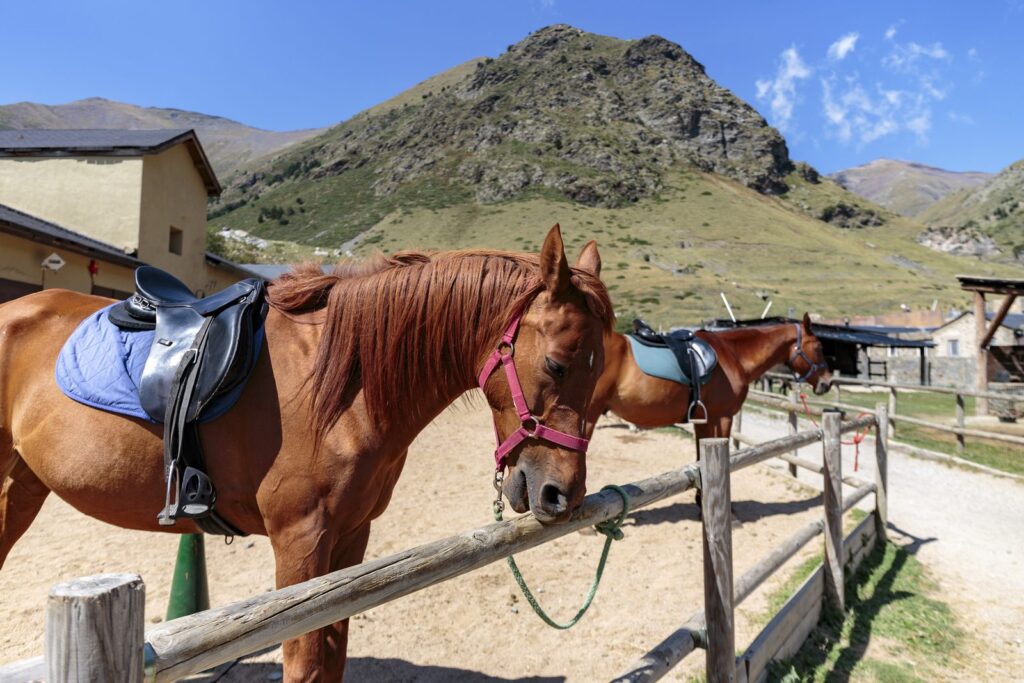 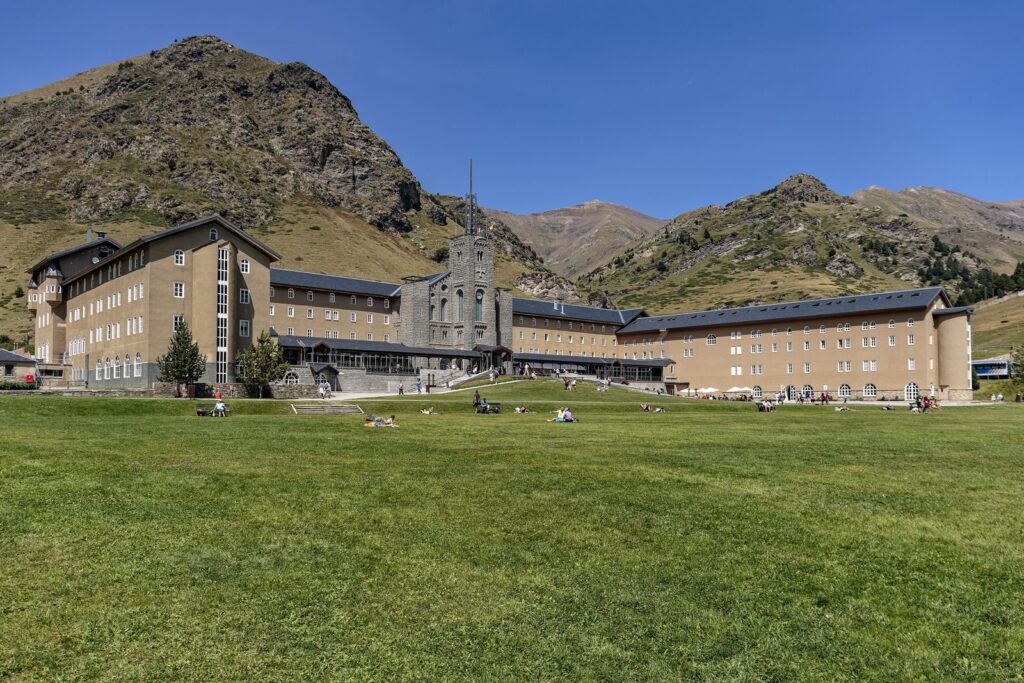 You can lie on the green lawn in front of the basilica of Nuria.
*** 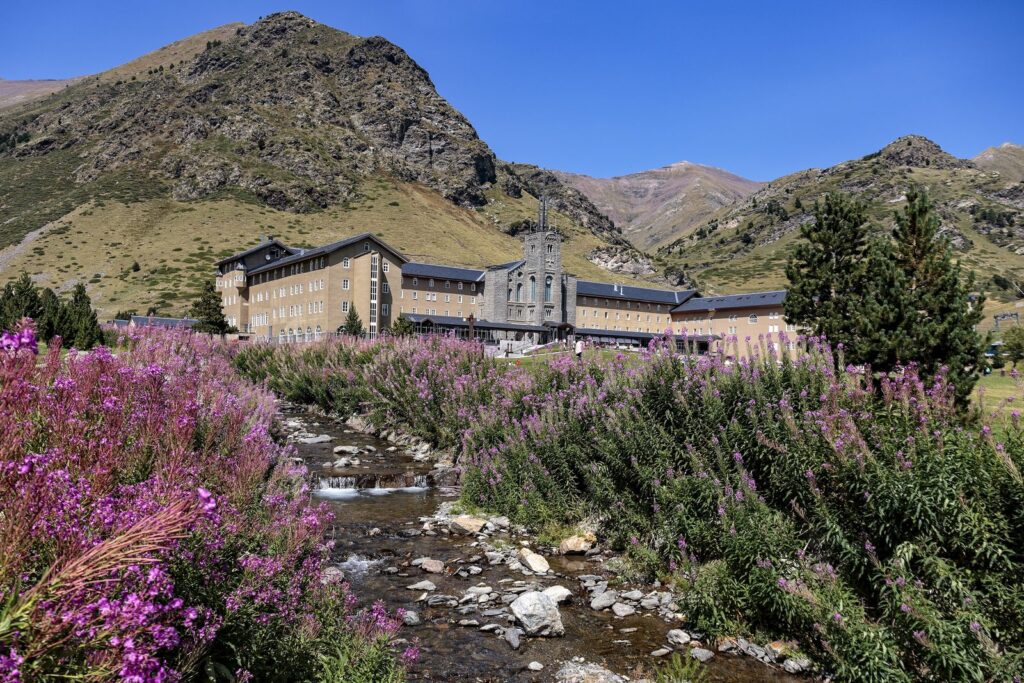 We continue our way along the mountain stream towards the lake.
*** 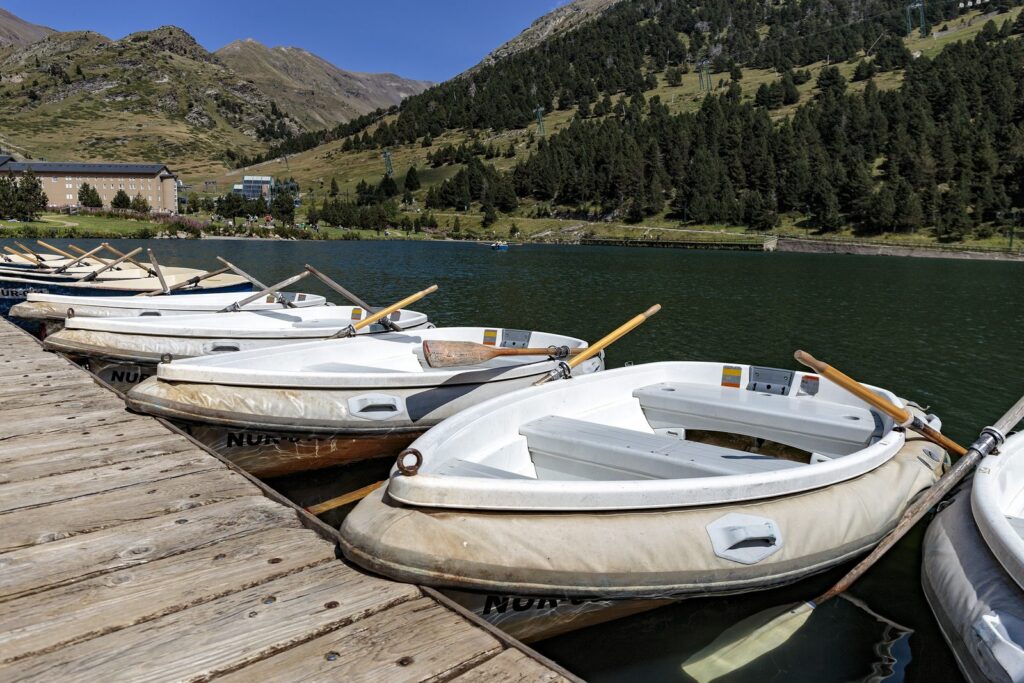 After the siesta, physical exercises are mandatory. Therefore, we rent a boat and start rowing on the lake.
*** 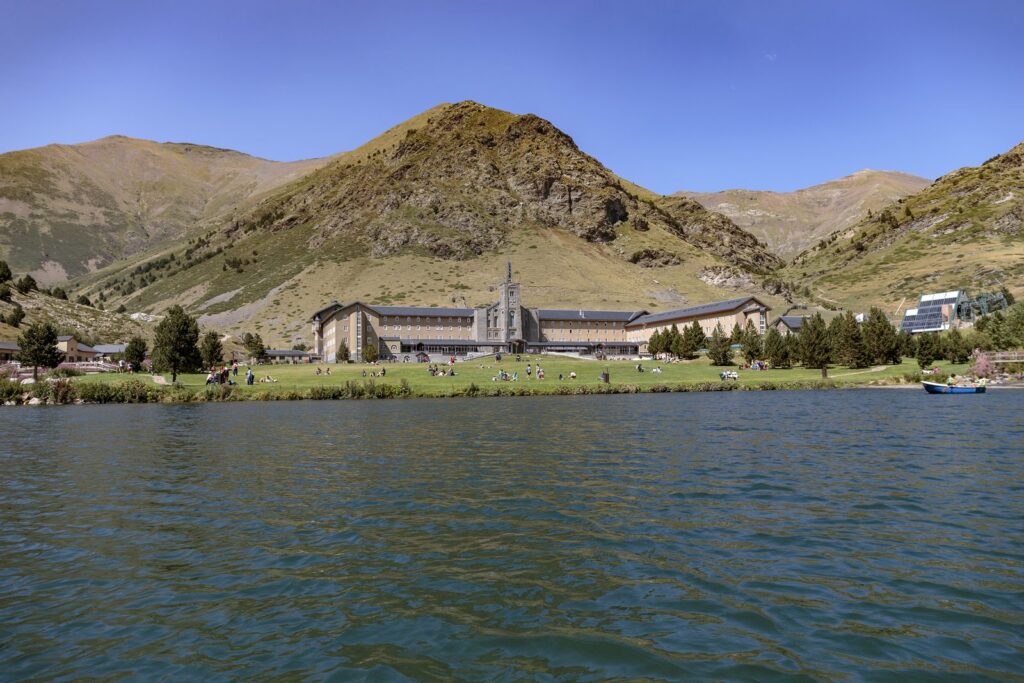 From the water, everything also looks very picturesque.
*** 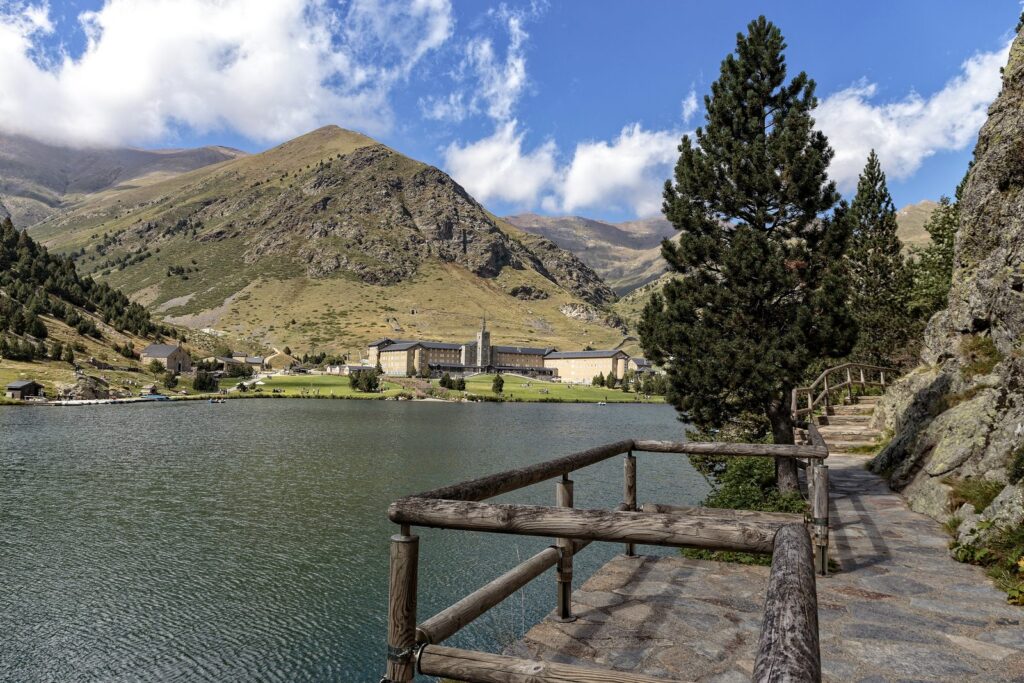 After boating you can go for a walk around the lake. 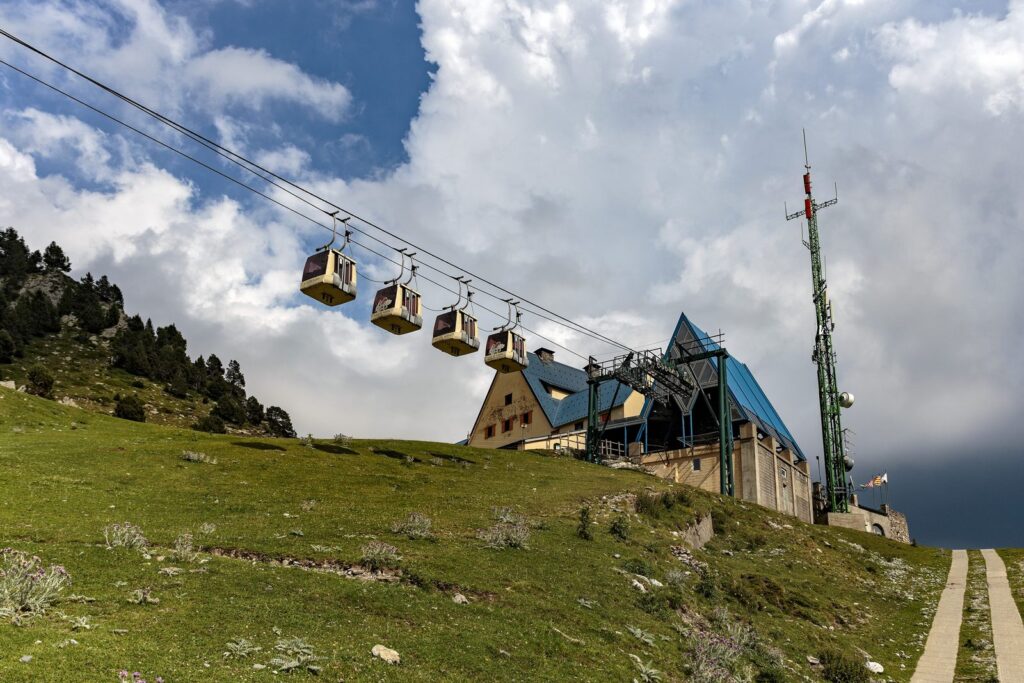 Hostel Alberg Pic de l’Àliga is located on one of the peaks surrounding the Nuria Valley and offers stunning views. You can get there in the cabin of the ski lift.
*** 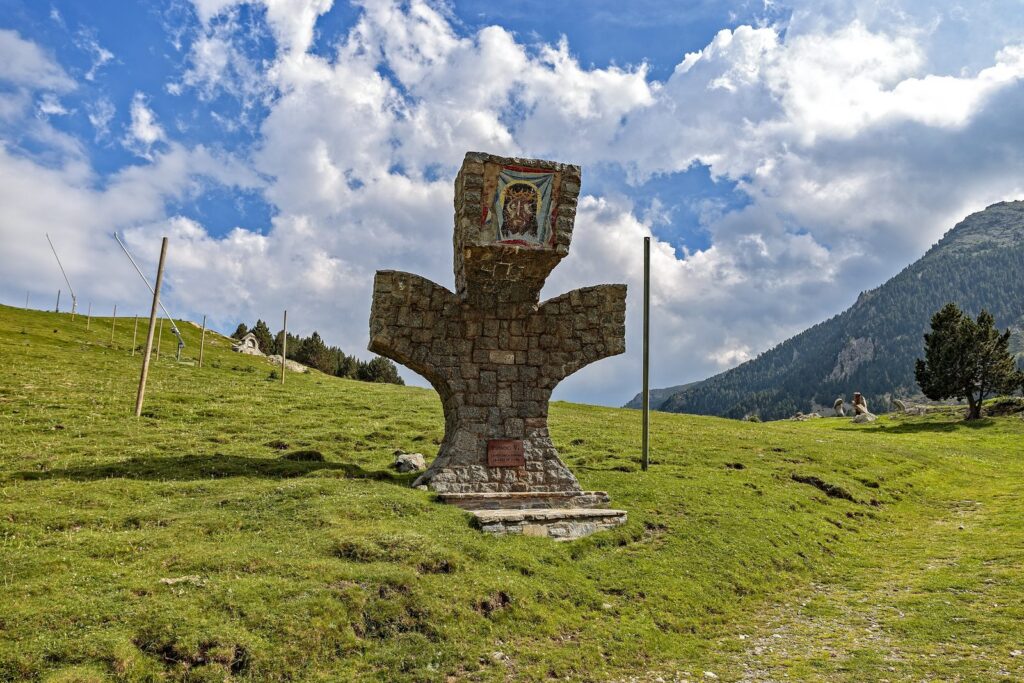 In addition, the hostel can also be reached via the “Way of the Cross” – Via Crucis de Núria, the construction of which lasted from 1915 to 1965. Along it are sculptural compositions depicting the tragic ascent of Christ to Golgotha. Each composition is dedicated to one of the key moments. Here, for example, Veronica, who accompanied Christ on His Way of the Cross, gave Him a linen scarf so that Christ could wipe blood and sweat from his face.
*** 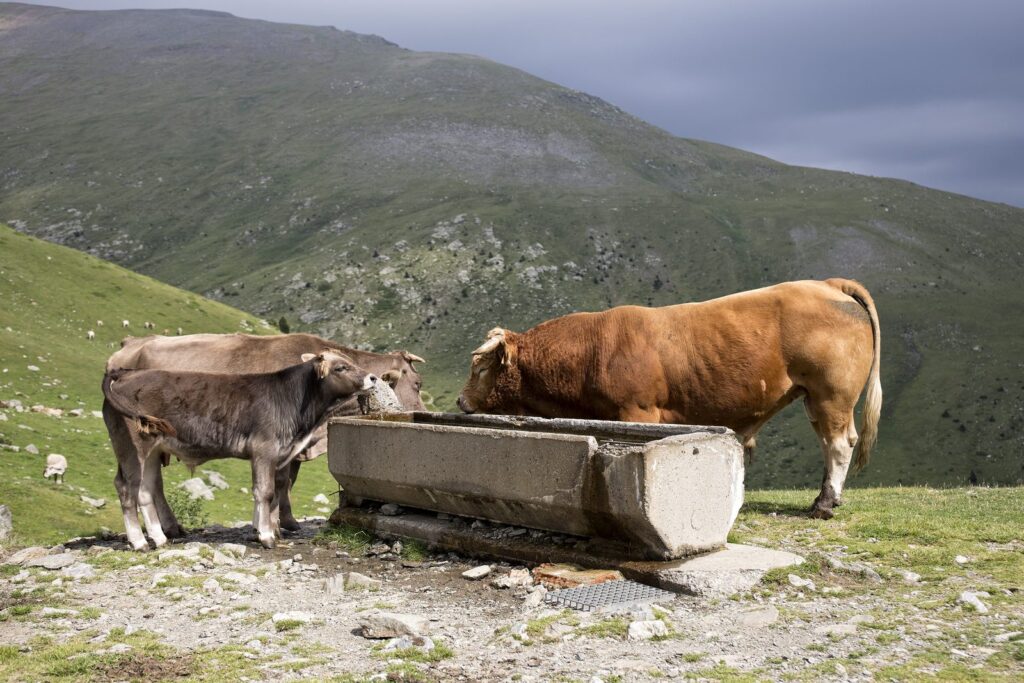 In the mountains you can meet peacefully grazing cows everywhere.
*** 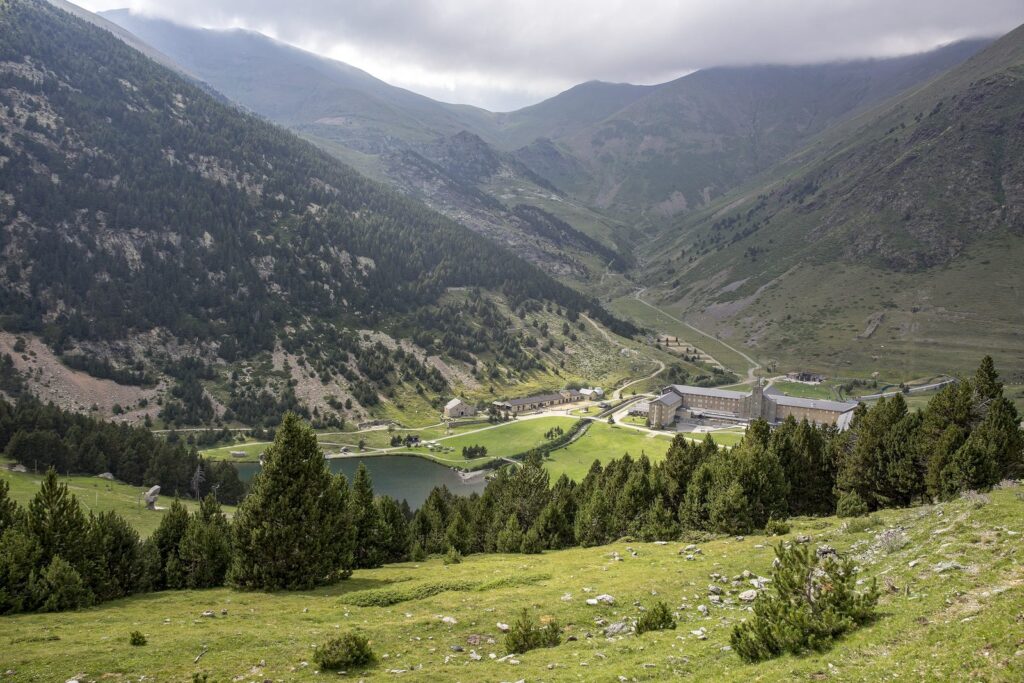 View of the Vall de Nuria valley in summer from the hostel.
*** 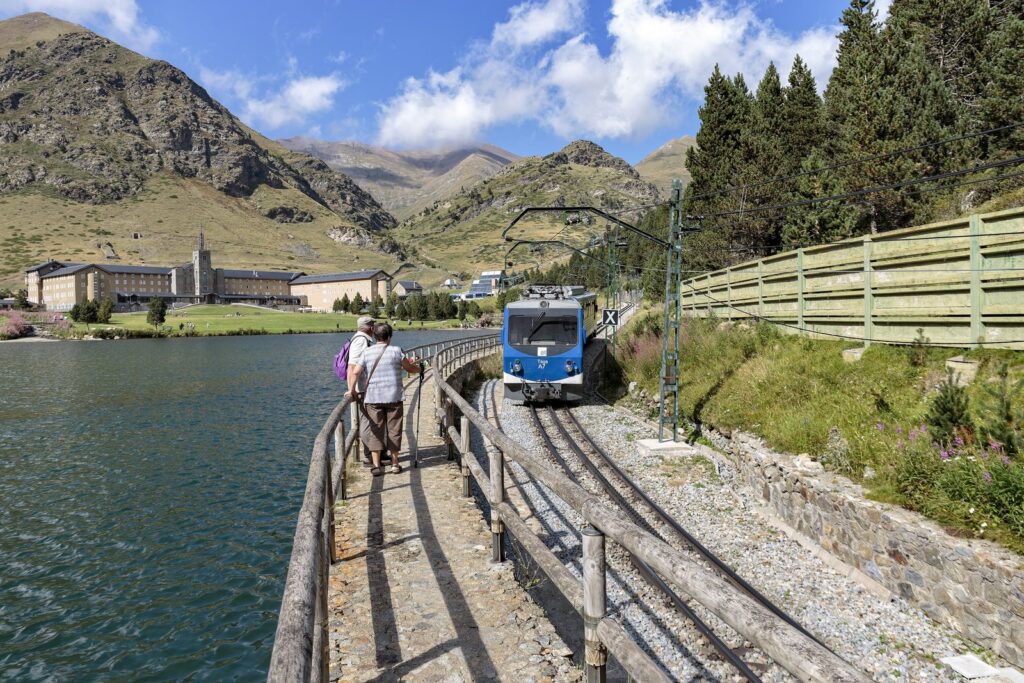 Breathing in the mountain air, passing more than a thousand steps, tired, but satisfied, we take the train of the cog railrway and set off on the return trip. Goodbye, Nuria!

A more detailed story about visiting the Vall de Nuria valley in the summer with photos can be viewed following the link in our blog.
Share this post
Tags: None