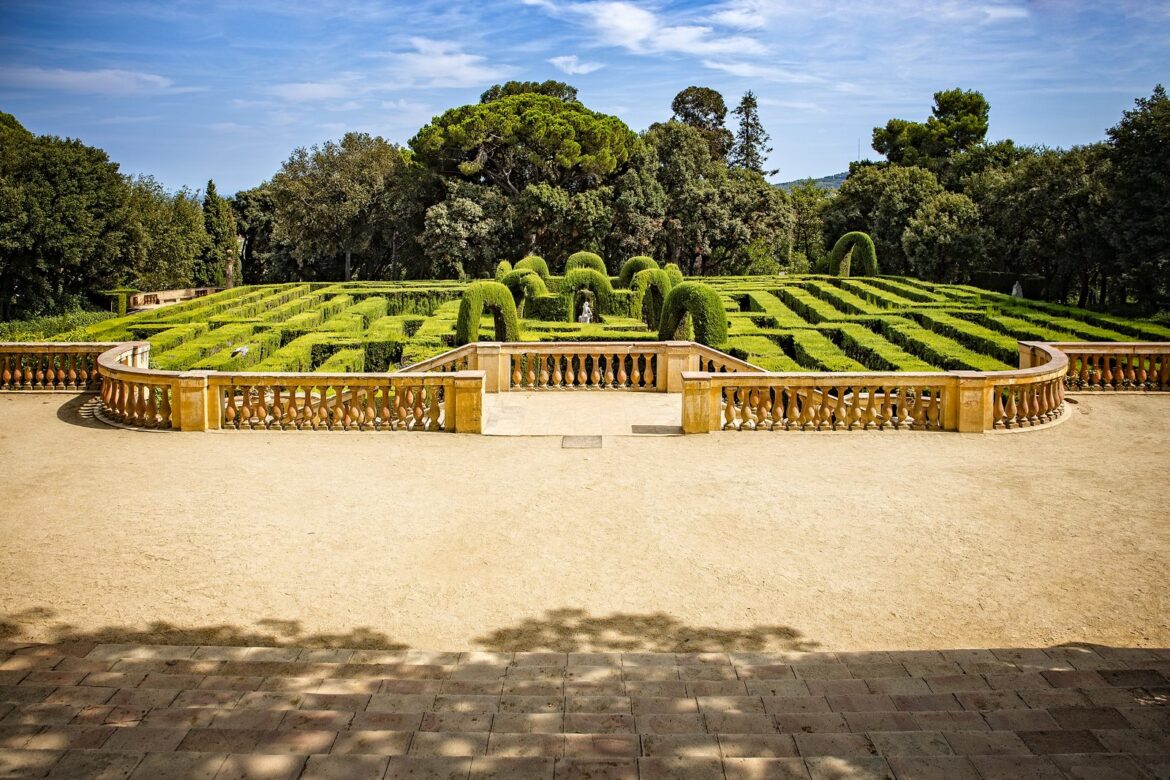 If you want to spend a day in nature without leaving the city, we recommend that you visit the park Labyrinth Horta (Parc del Laberint d’Horta) in Barcelona.
This remarkable place was created at the end of the 18th century by Senor Joan Desvalls, Marquis de Llupià, Poal and Alfarràs. This enlightened man, equally passionate about nature, science and art, invited the Italian architect Domenico Bagutti in 1791 to bring the idea of creating a neoclassical garden to life. At first, this garden included a maze of cypress trees, which contained various sculptures and bas-reliefs from Greco-Roman mythology, symbolizing various stages of love – according to legend, Theseus, who defeat the Minotaur in the labyrinth, received Ariadne’s love as a reward. Later, a romantic garden was added to the neoclassical garden. The Desvalls family owned the park until 1967, after which they sold it to the Barcelona authorities; in 1971, the Horta labyrinth park was opened to the general public.
Today, the park covers an area of 9 hectares and consists of several different zones, including gardens, multi-level terraces, reservoirs, a forest area and even a mountain stream. Botanists enthusiastically describe the amazing variety of flora that can be found while walking in the park. In the famous labyrinth, scenes of various movies were repeatedly filmed, including “Perfume: The Story of a Murderer” based on the book by Patrick Süskind.
We invite you to take a short virtual tour of the park with us. 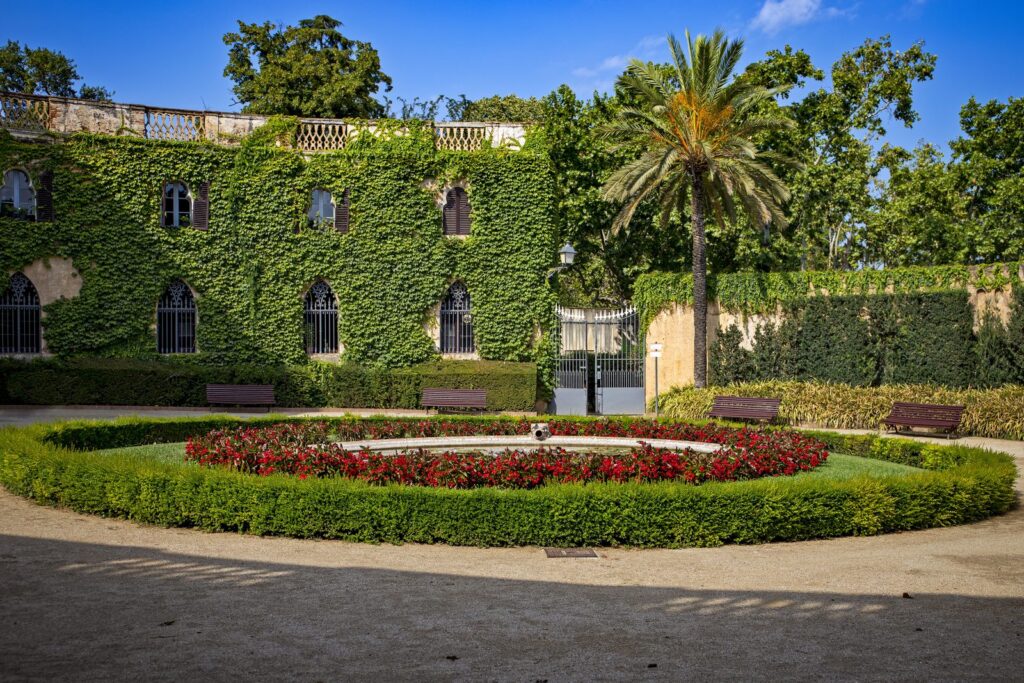 The courtyard of the estate of the Desvalls family, who once owned a labyrinth park.
*** 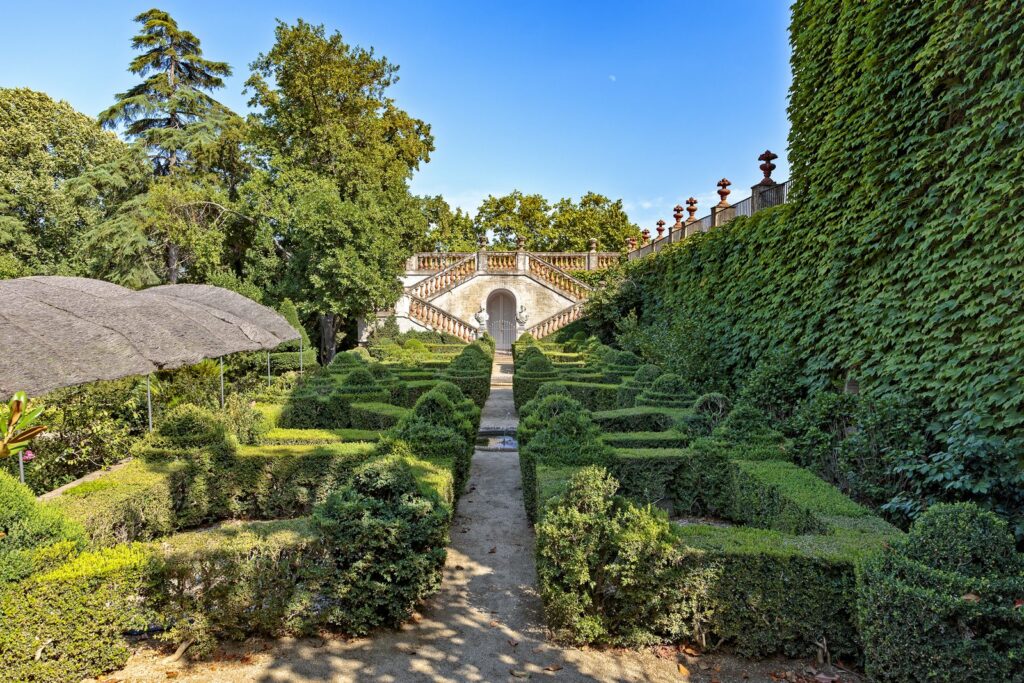 The garden behind the estate.
*** 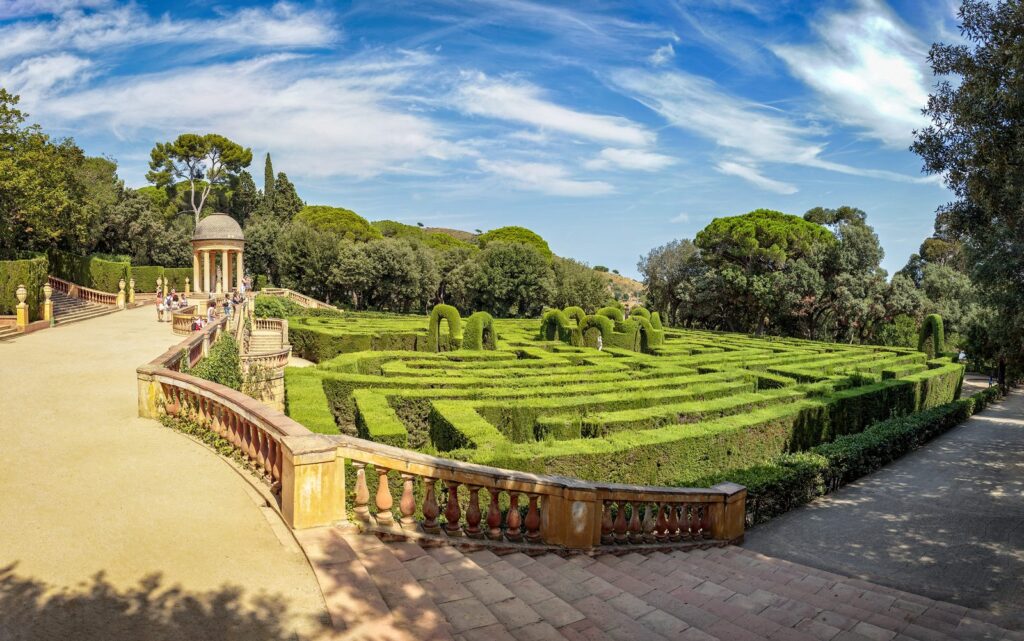 And here is the famous labyrinth itself.
*** 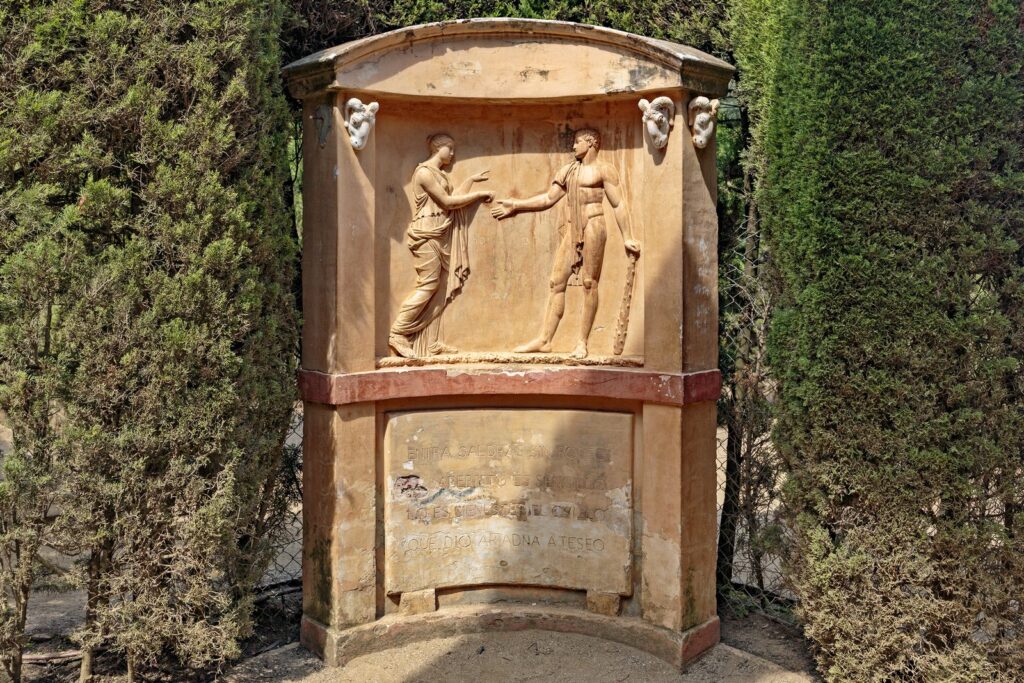 Bas-relief of Ariadne and Theseus. The inscription in free translation reads – the labyrinth is simple, do not be afraid, you will not need a guiding thread. Simple or not simple, but it is very possible to find yourself in a dead end in the maze!
*** 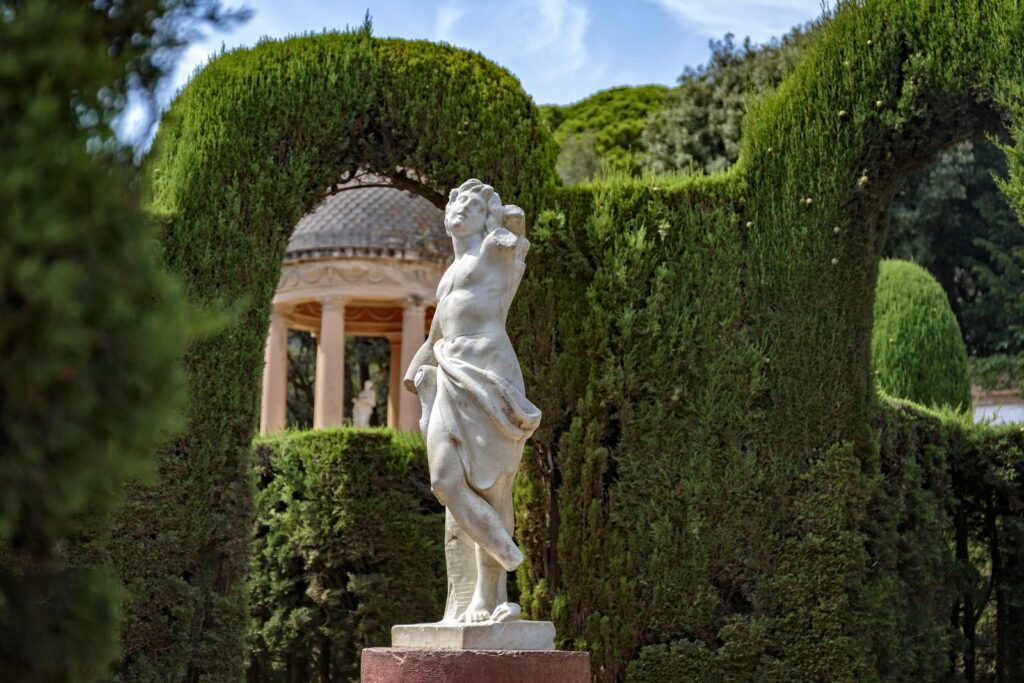 A statue of Eros in the center of the maze.
*** 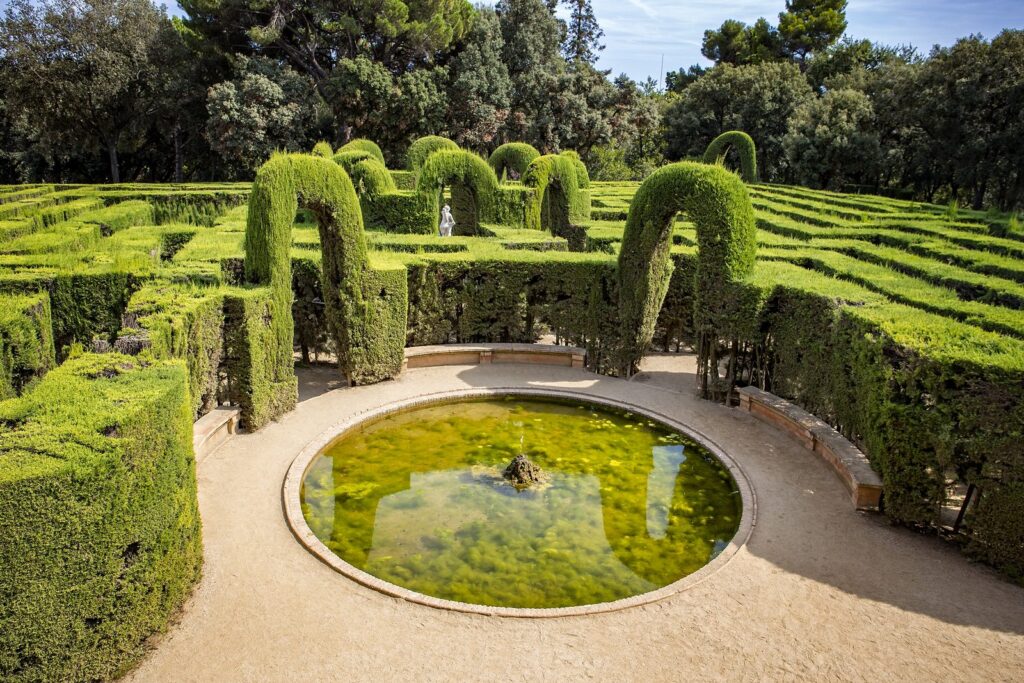 Those who are lucky enough to find a way out of the labyrinth come to this round pond.
*** 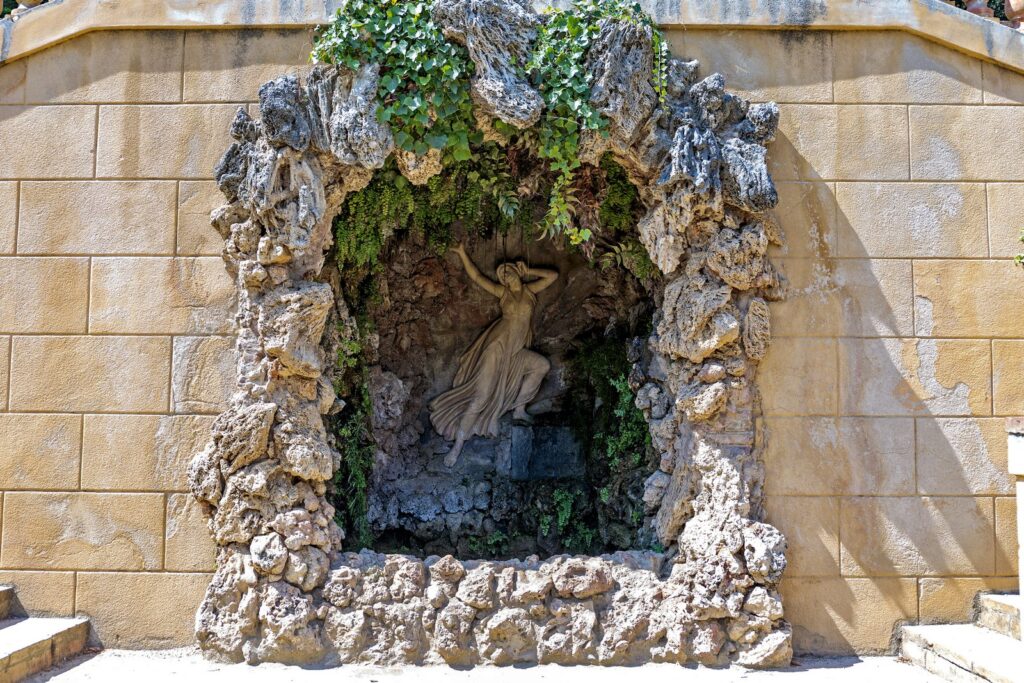 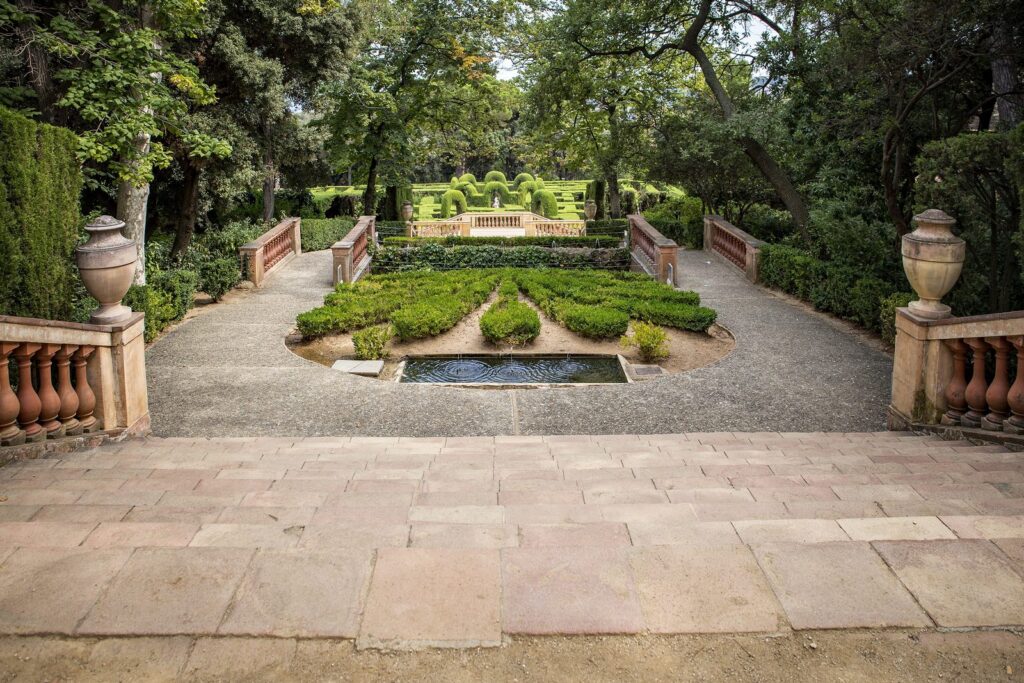 From the labyrinth, up the stairs, we climb to the neo-classical pavilion.
*** 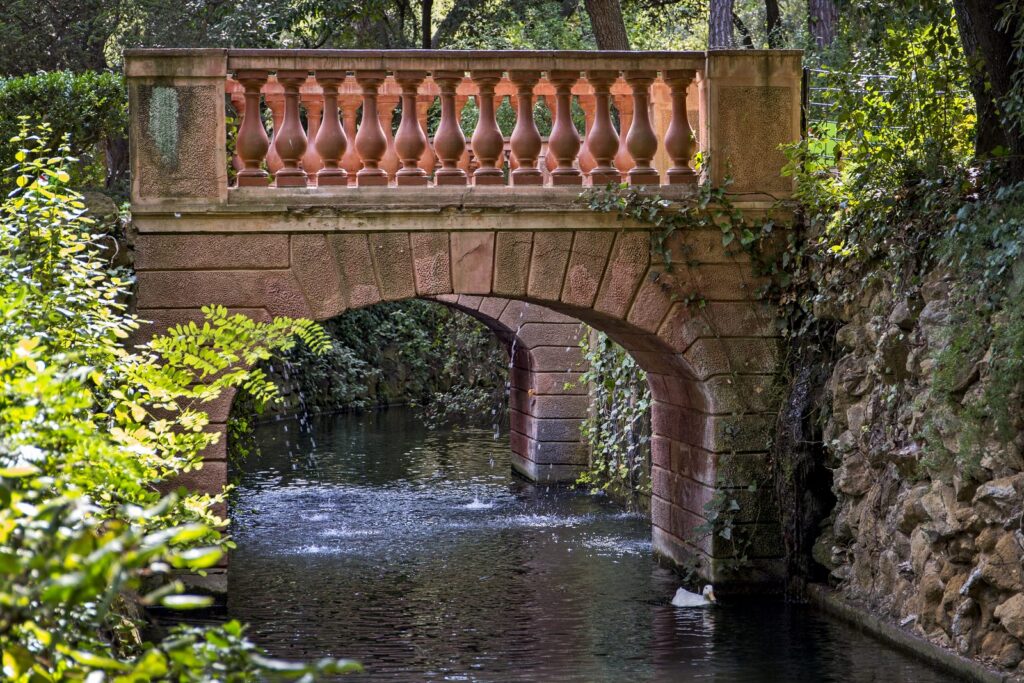 Geese swim carefree on the surface of the water channels. On a small island they even have their own house, though without a sea view😃.
*** 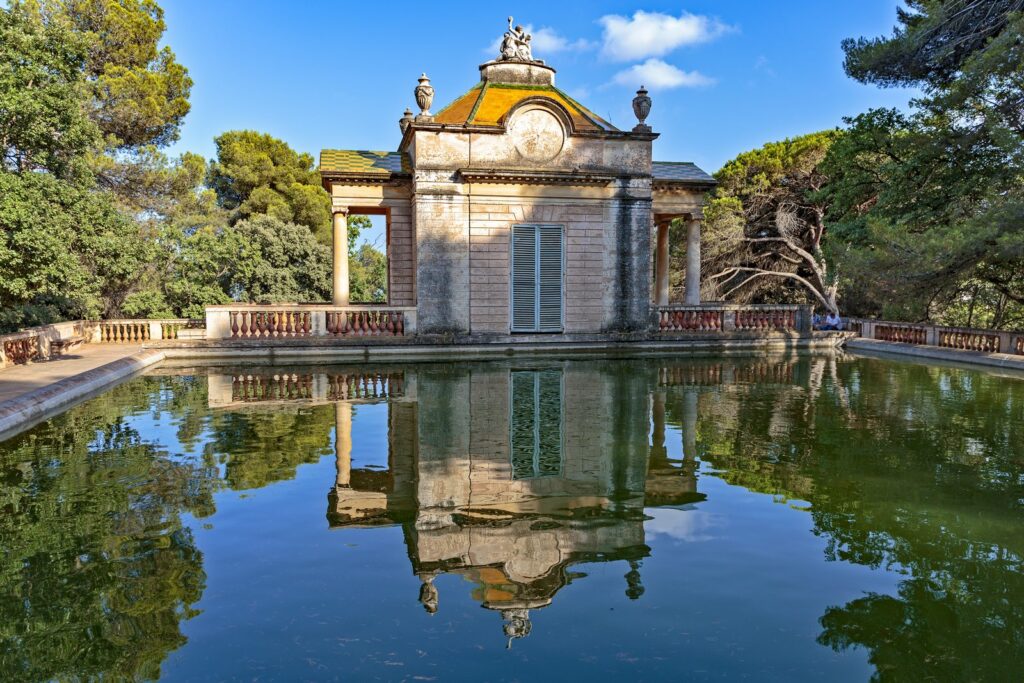 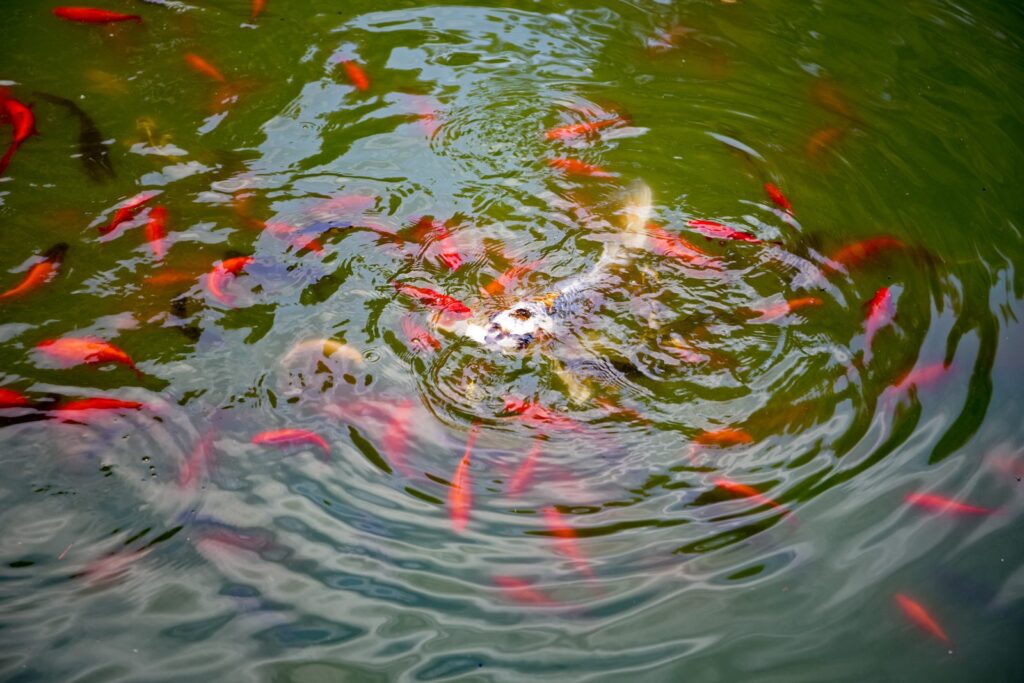 Numerous colored carps live in the pond near the pavilion. If you have a piece of bread left over from a sandwich, the fish will be very grateful!
*** 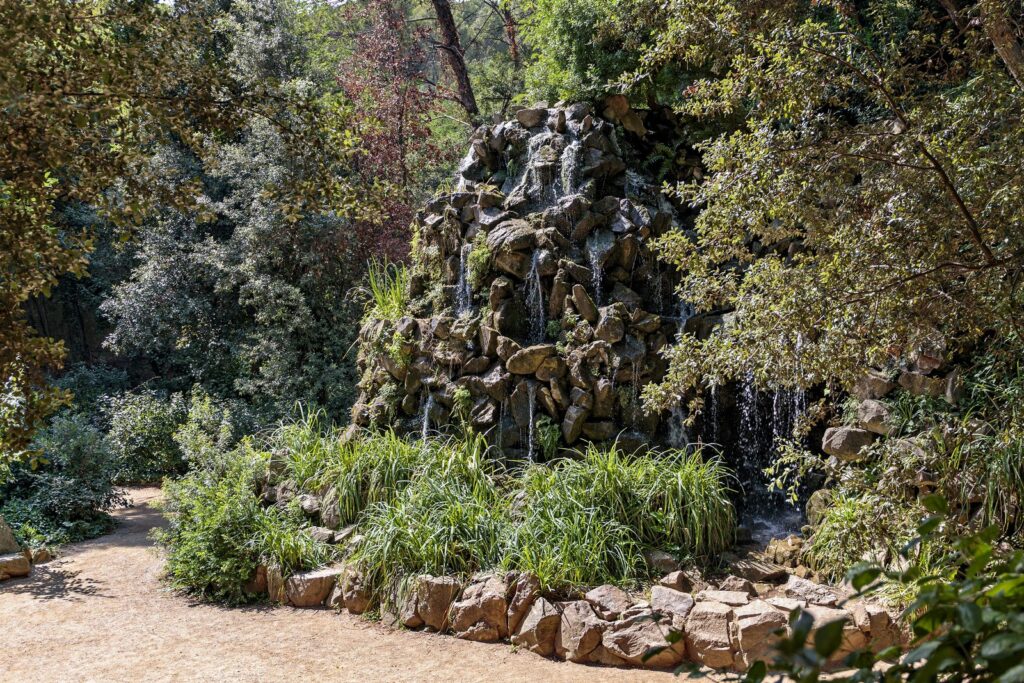 Behind the neo-classical pavilion, a forest zone begins, in which there is a real waterfall.
*** 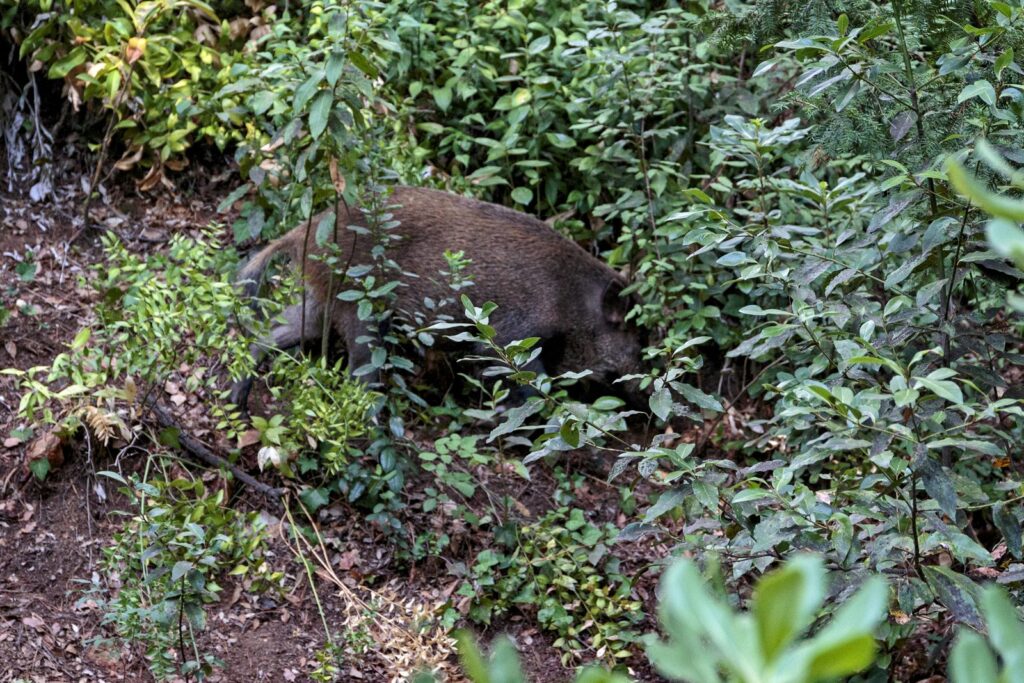 In the forest zone, you can easily meet a wild boar, which absolutely does not pay attention to walking tourists.
*** 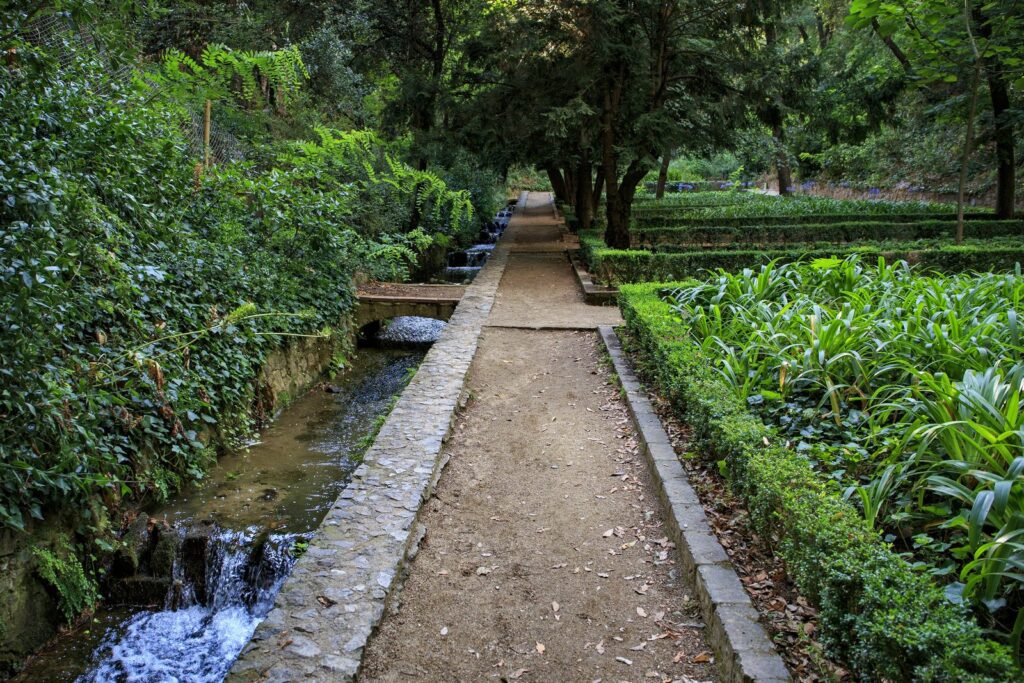 A mountain stream flows along the avenue of the romantic garden.
*** 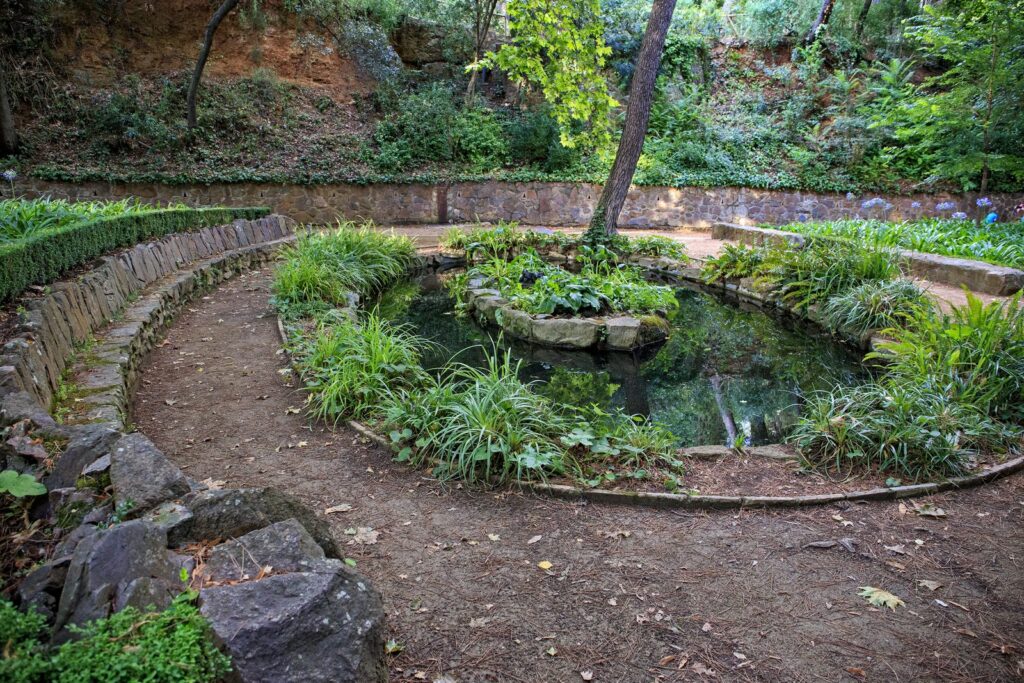 Throughout the park, there are places to sit, relax, and indulge in thoughtful contemplation or meditation.
*** 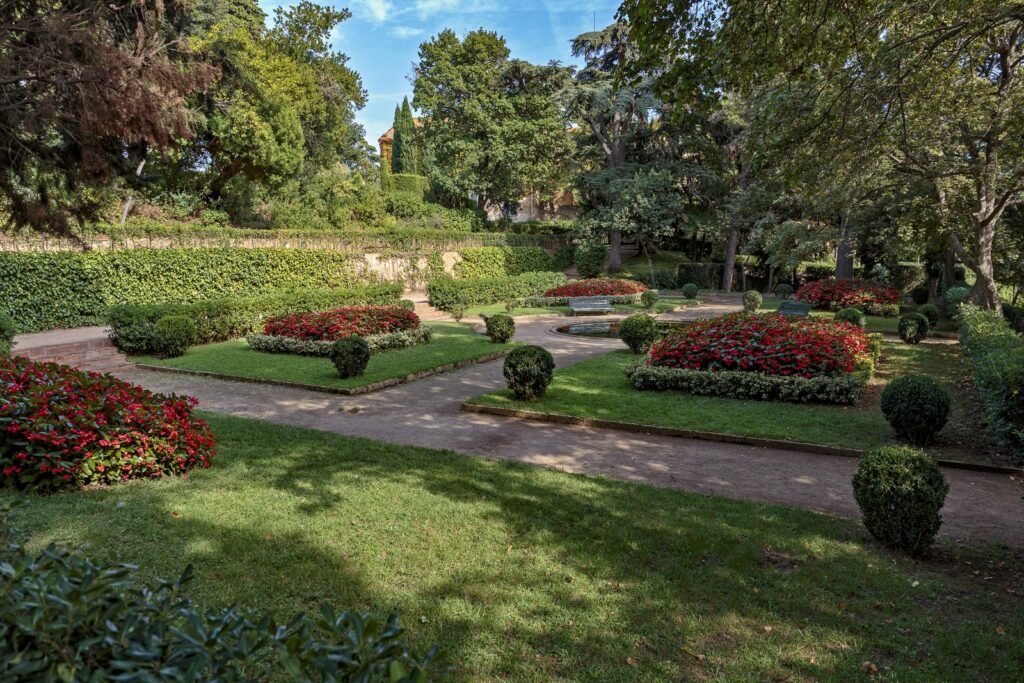 Horta Labyrinth Park is a real oasis during the hot season in Barcelona!
***

Mysterious grottoes and strange doors meet in the park every now and then.
*** 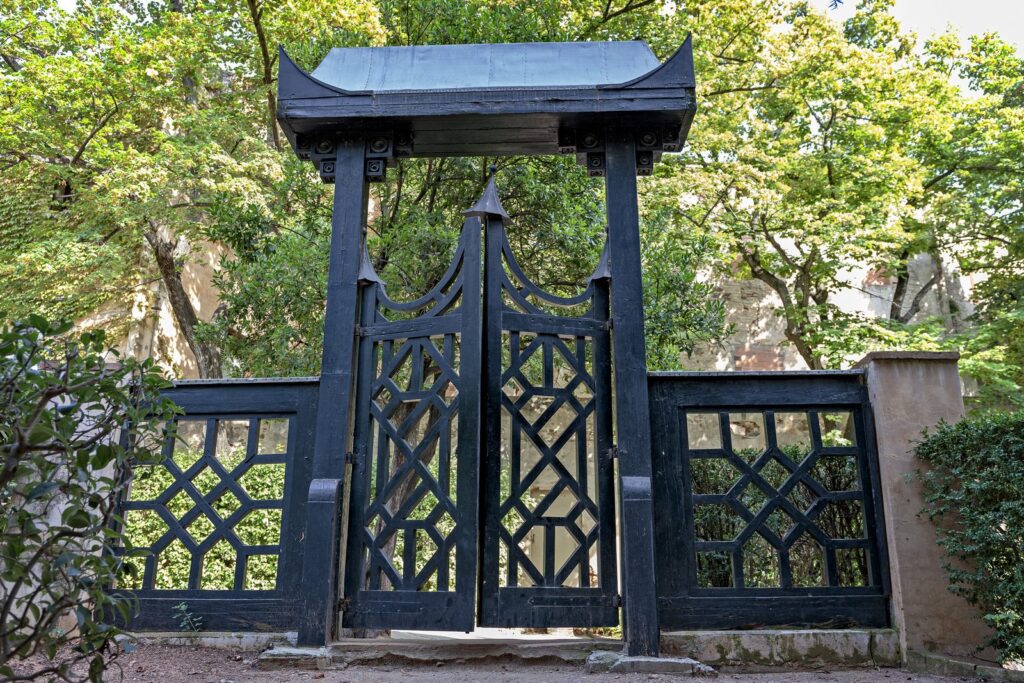 More photos that we took while visiting the Horta labyrinth park in Barcelona can be viewed following the link in our blog.
The Costa Brava also has wonderful parks to visit, such as the gardens of Santa Clotilde in Lloret de Mar, the Marimurtra botanical garden in Blanes or the Cap Roig gardens in Calella de Palafrugell.
Share this post
Tags: None