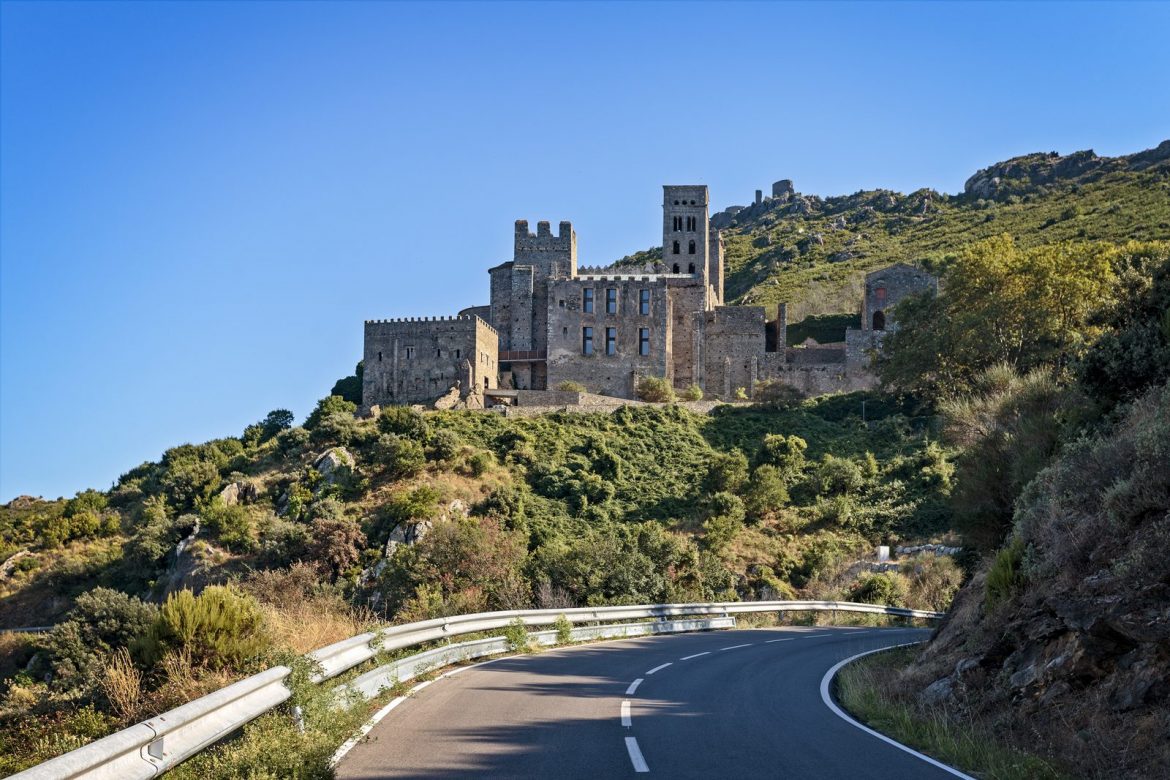 On the northern slope of the most prominent east point of the Iberian Peninsula, сape Cap de Creus, on a spot with breathtaking views of the Mediterranean Sea, is the once mighty Benedictine monastery of Sant Pere de Rodes. By the way, this place is considered as one of the most visited places in Spain!
The first monks, attracted by the stunning views, great climate and almost walking distance to the beautiful sandy beach in the nearby town of Port de La Selva, settled here in the 9th century. Already in 944, the monastery had abbey status and became a center of pilgrimage for wandering monks from all countries of the Christian world.
As is usually the case, the issues of money and land ownership have long spoiled relations between the fraternal Spanish and French peoples, and problems arose, as always, among the unfortunate Catalans who found themselves in the middle. Numerous wars, attacks by North African pirates, as well as terrible epidemics that raged in the Middle Ages led to the fact that the monastery gradually began to decline, starting from the 14th century. Even the flourishing of winemaking in this region in the 17th-18th centuries could not change the situation and mood. Since the middle of the 19th century, the monastery has been systematically destroyed and was literally plundered in parts by zealous peasant neighbors and greedy collectors of antiques.
Fortunately, in 1930 the monastery was declared a National Historic Artistic Monument. Since then, numerous restoration works have been carried out on its territory in an attempt to revive the former appearance of this impressive creation of human hands. Today we have the opportunity to visit the monastery of Sant Pere de Rodes and understand what made the Benedictine monks acquire real estate in this particular area of Catalonia.
A few photos to get a general idea and decide if you need to go there😃. 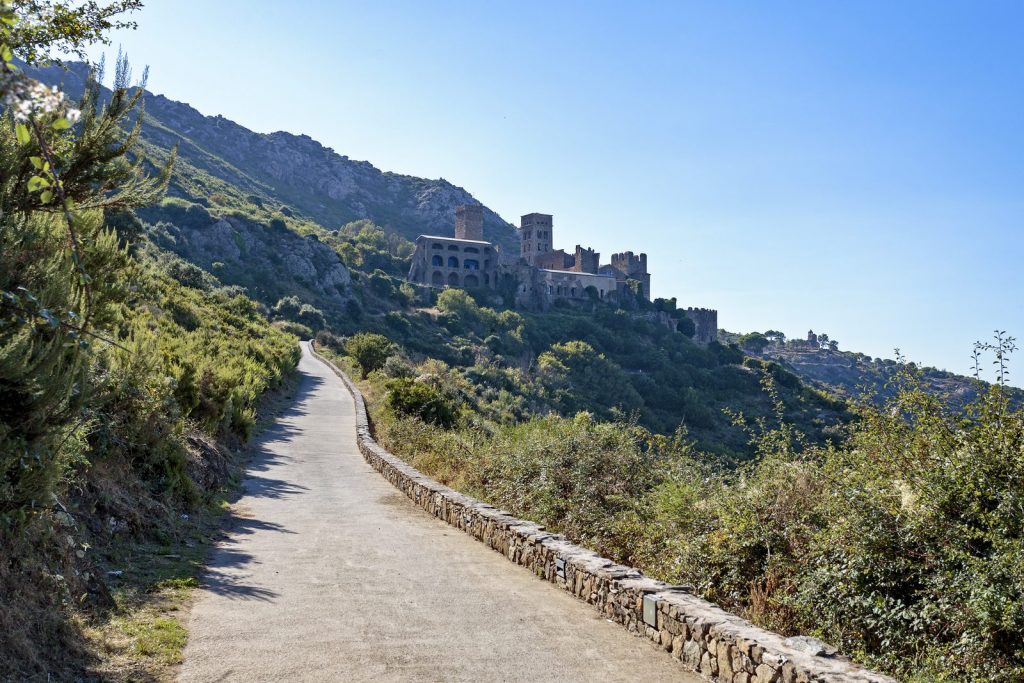 We leave the car in the parking lot and go along the footpath up to the monastery.
*** 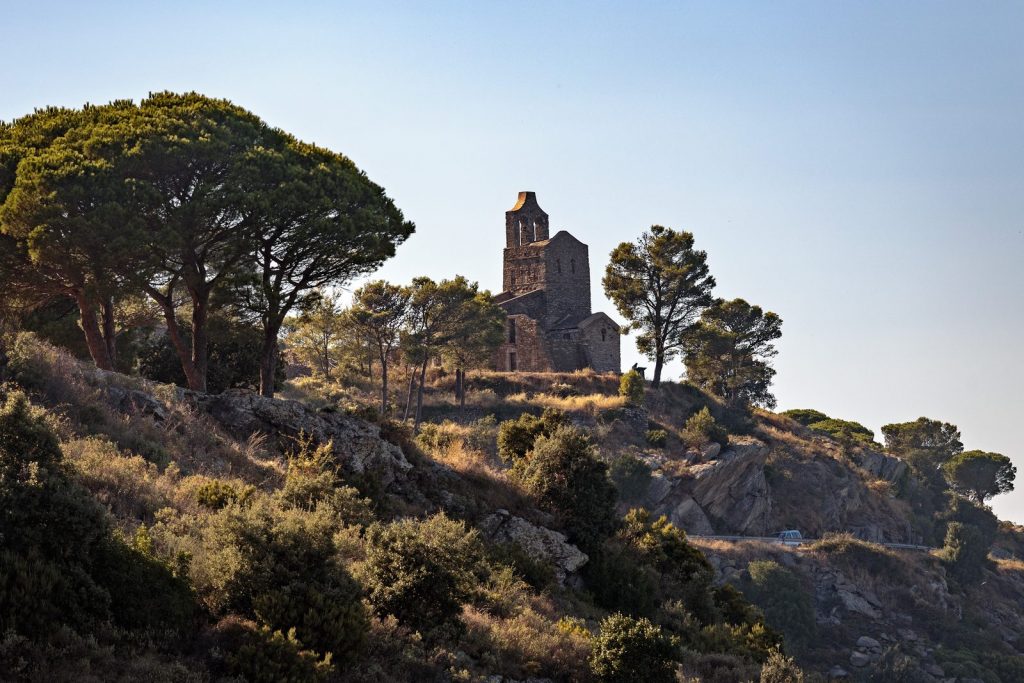 About half a kilometer from the monastery are the ruins of the village of Santa Creu that once existed here. The photo shows the remains of the Santa Helena de Roda church, which was first mentioned in historical chronicles in 974. The village was abandoned by the inhabitants around the same period when the monks left the monastery.
*** 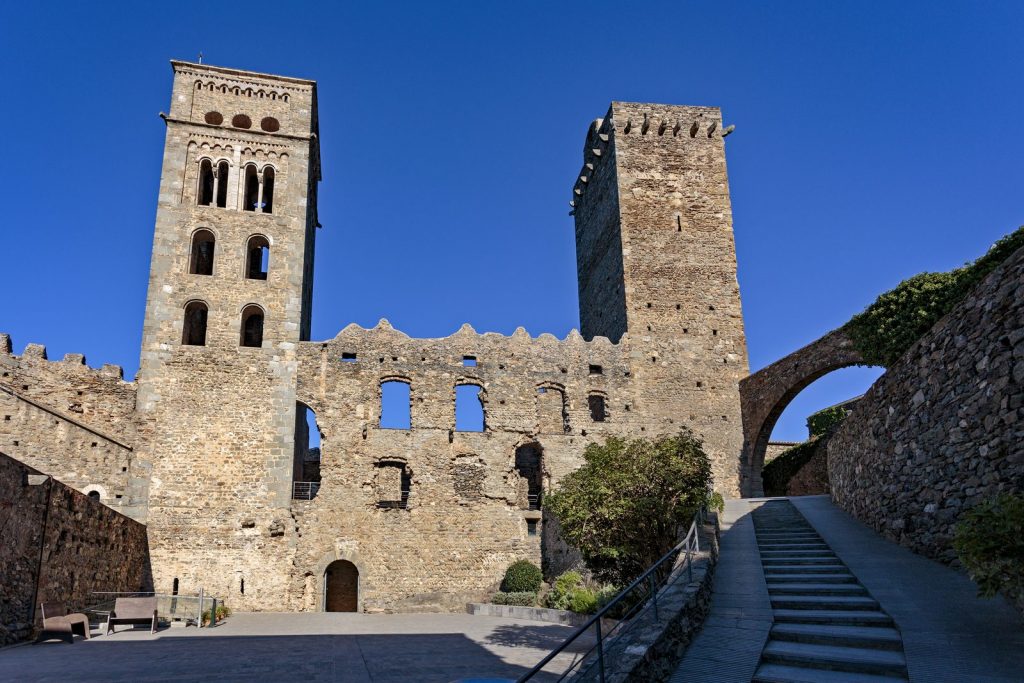 The imposing towers of the monastery. On the left is the bell tower of the monastery church. On the right is the tower, which served as protection for monks and pilgrims during enemy attacks. This tower has no entrance from the outside, only from the inside of the monastery, and one could get to its top only through the holes made between the floors inside the tower.
*** 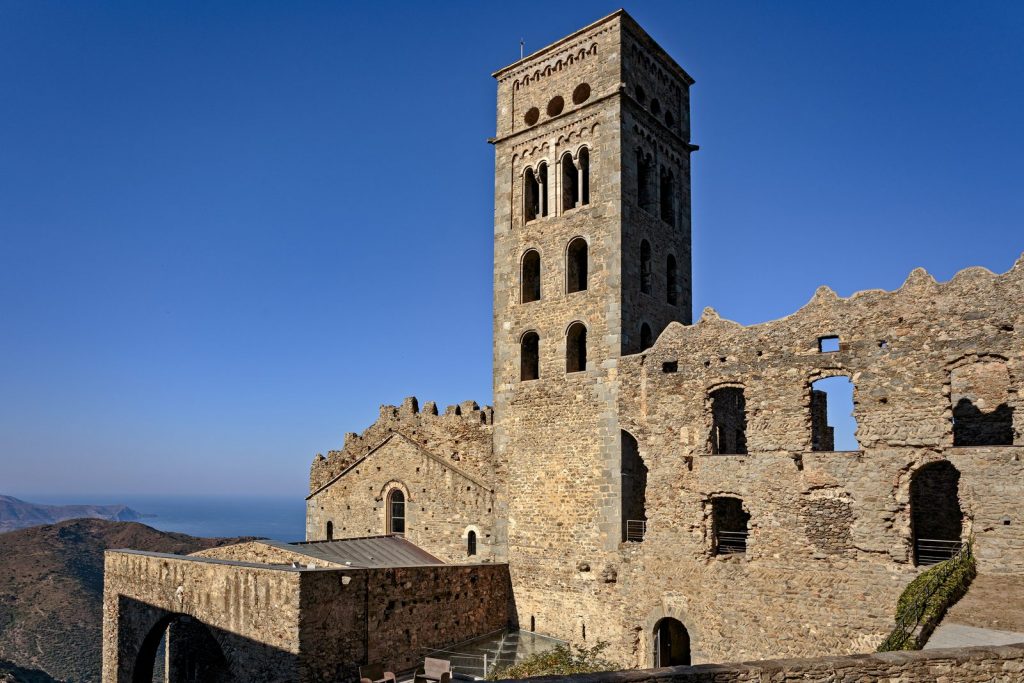 At the bottom left in the photo – the entrance to the monastery church. You can imagine the sea view from the towers of the monastery! 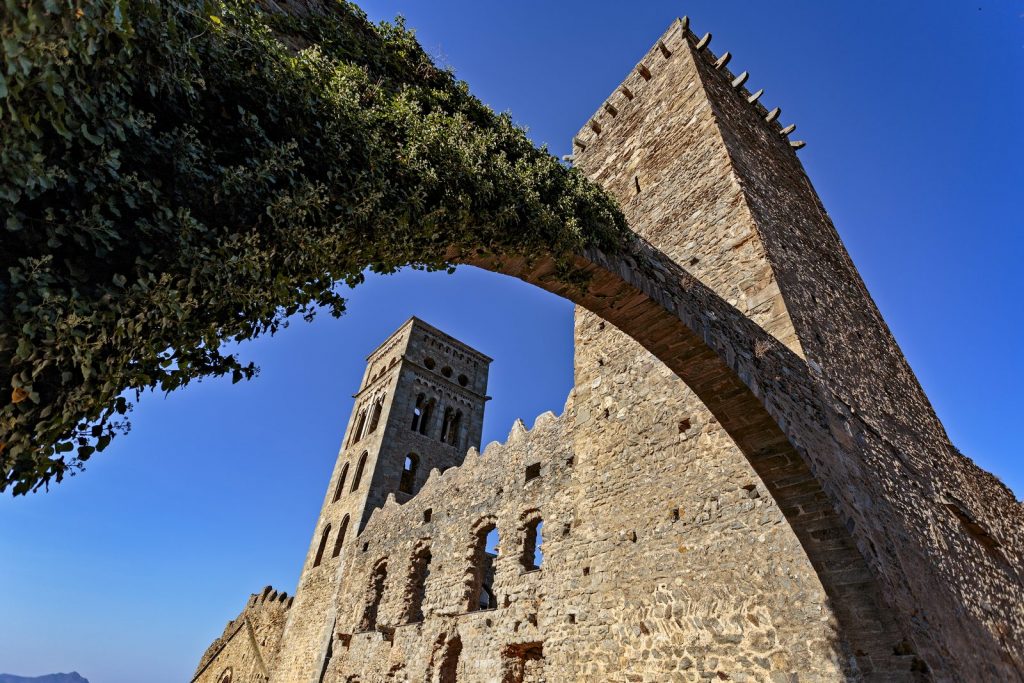 At the top of the defense tower, the remains of wooden beams are clearly visible. There was a balcony on them, on which monks and guests of the monastery could take refuge in case of danger, giving the opportunity to admire the beautiful landscapes, as well as miniature figures of the enemies far below.
*** 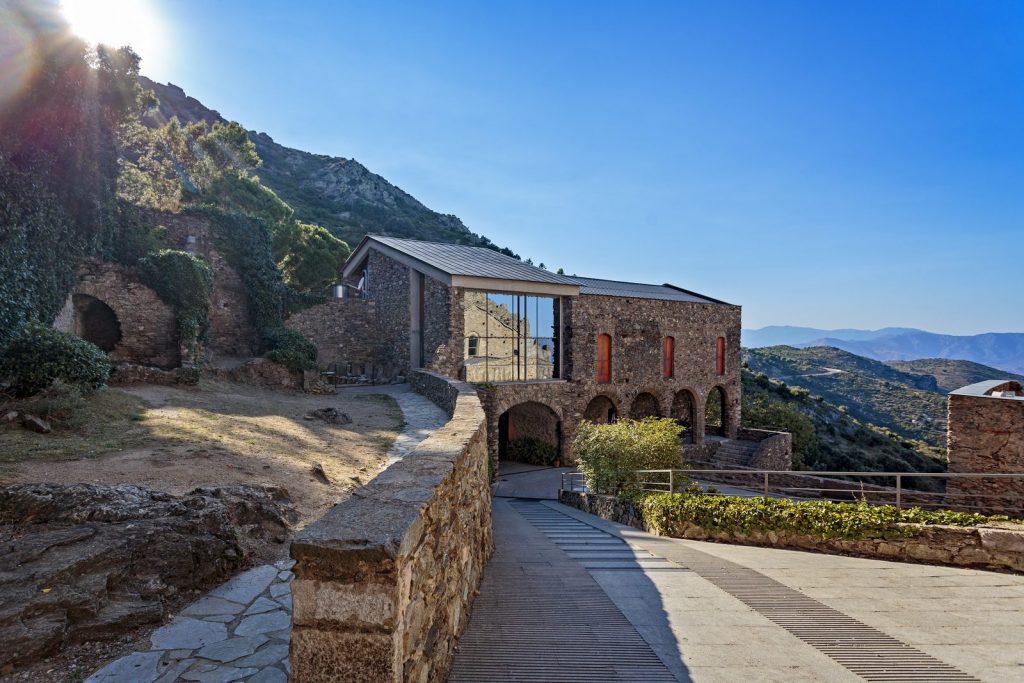 The walls of the monastery are beautifully reflected in the mirrored windows of the administrative building.
*** 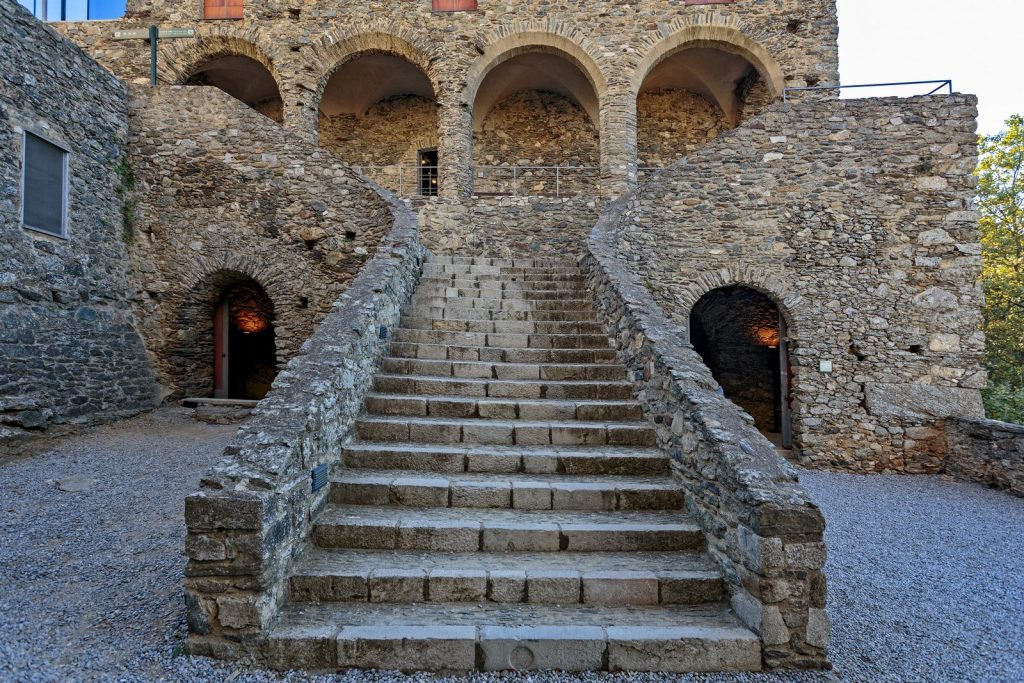 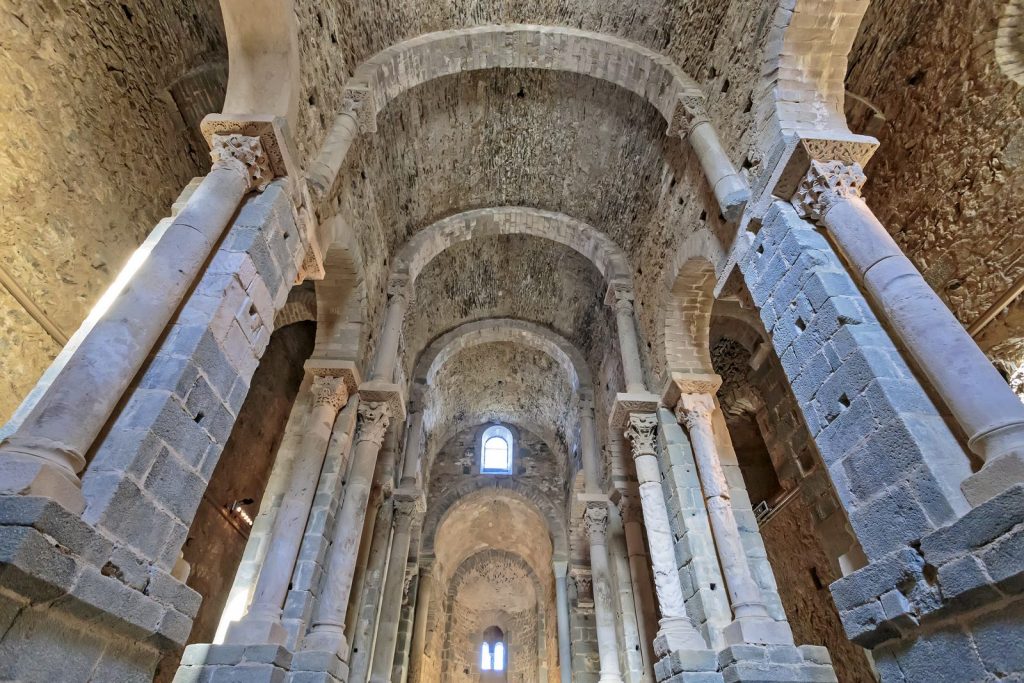 The majestic monastery church. The dome is 16 meters high. The supporting vaults of the columns are in the Corinthian style. The church was built in the period from X to XI century and stands on a mountain slope, the height difference between the northern and southern parts of the church is about 4 meters. Yes, the Catalans already knew how to build for centuries! The interior of the church was completely ransacked; fragments of it are said to be found in museums and antique collections around the world. 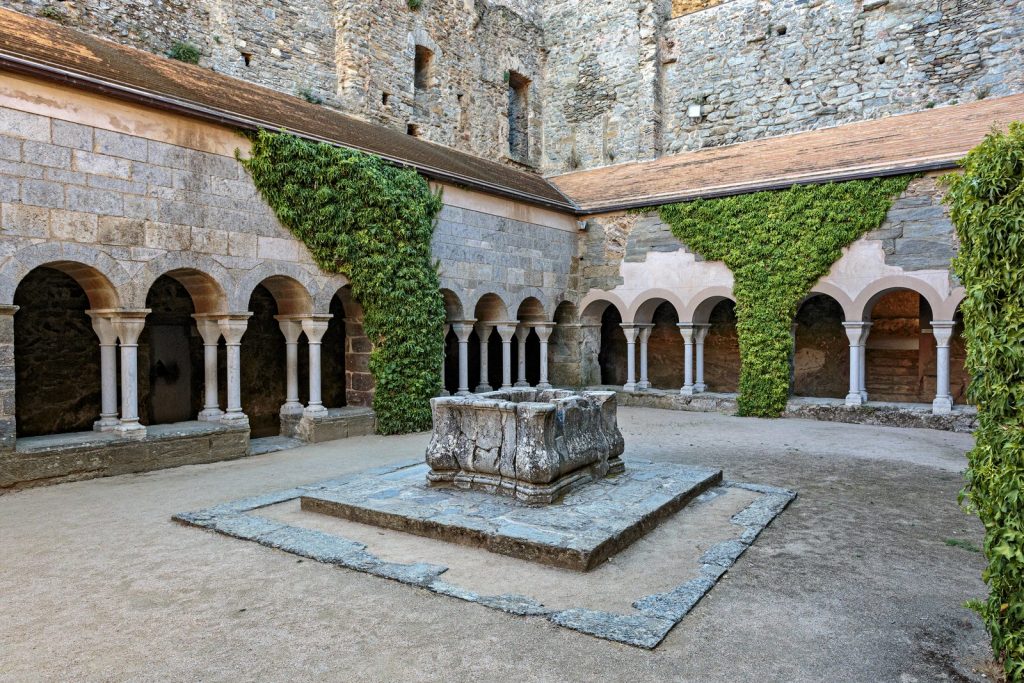 The inner courtyard of the monastery, scientifically – a cloister. It was almost completely restored during restoration work at the end of the last century.
***

The columns and even parts of the walls were destroyed and taken away in the period from 1835 to 1930. Today one can only imagine how everything really looked like here.
*** 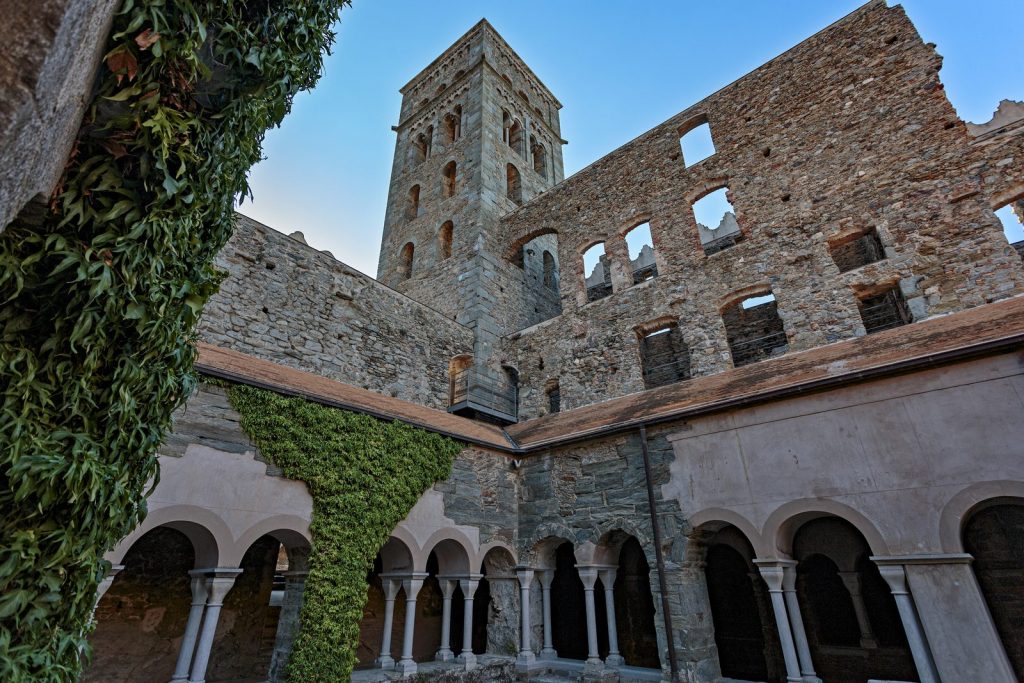 View of the bell tower from the courtyard.
*** 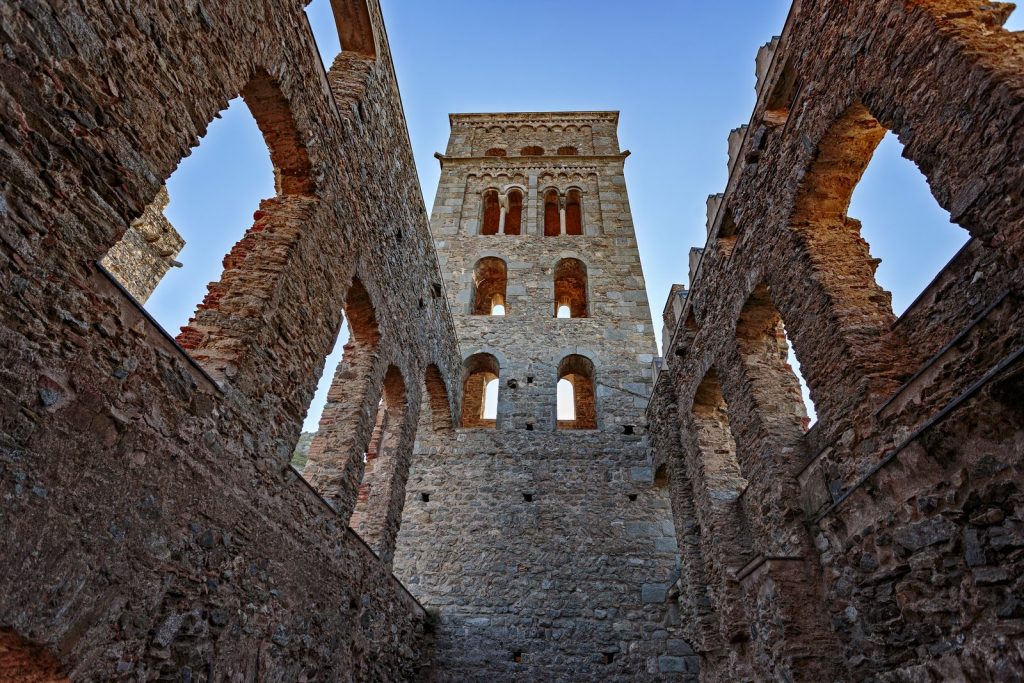 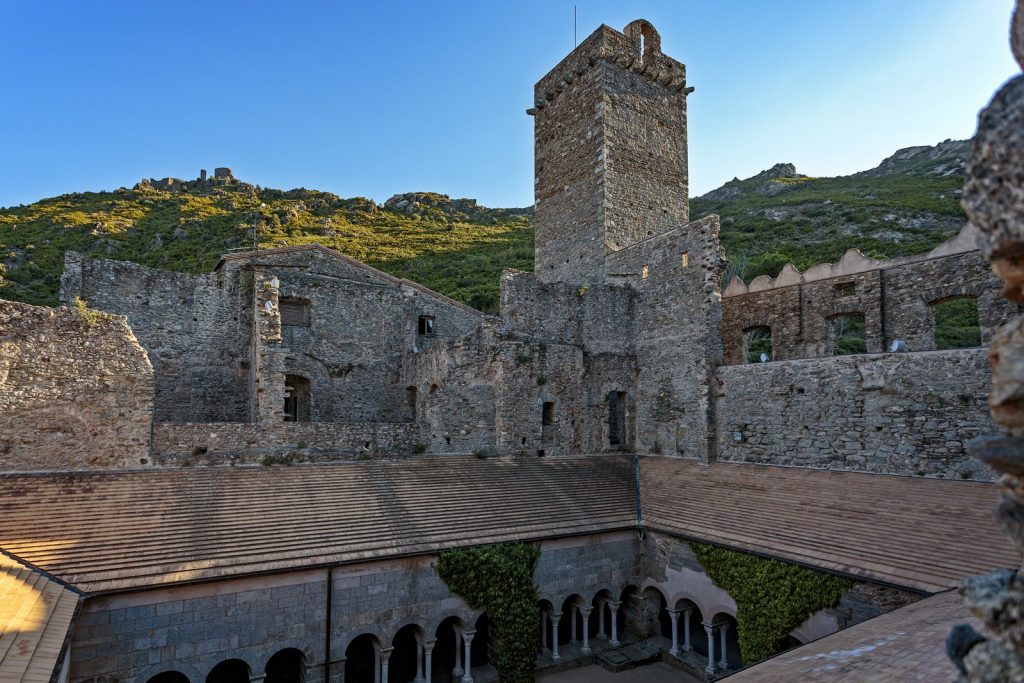 View of the defense tower from the upper floor.
*** 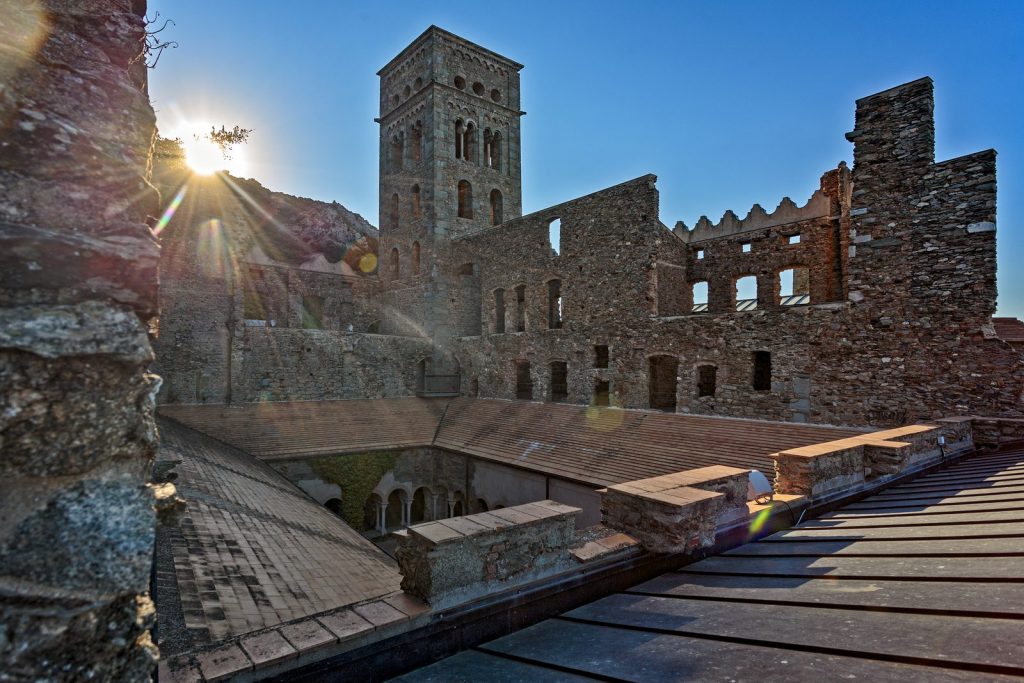 The last rays of the setting sun illuminate the monastery.
*** 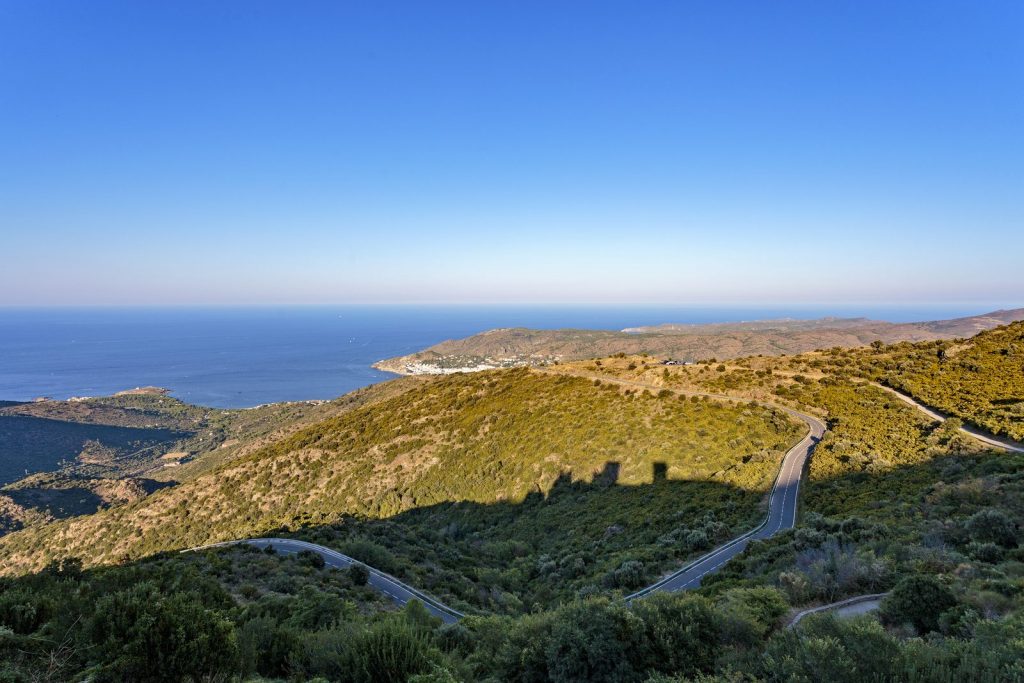 The observation deck overlooks the Cap de Creus cape and the sea. White buildings in the middle of the photo – the city of Port de la Selva.
*** 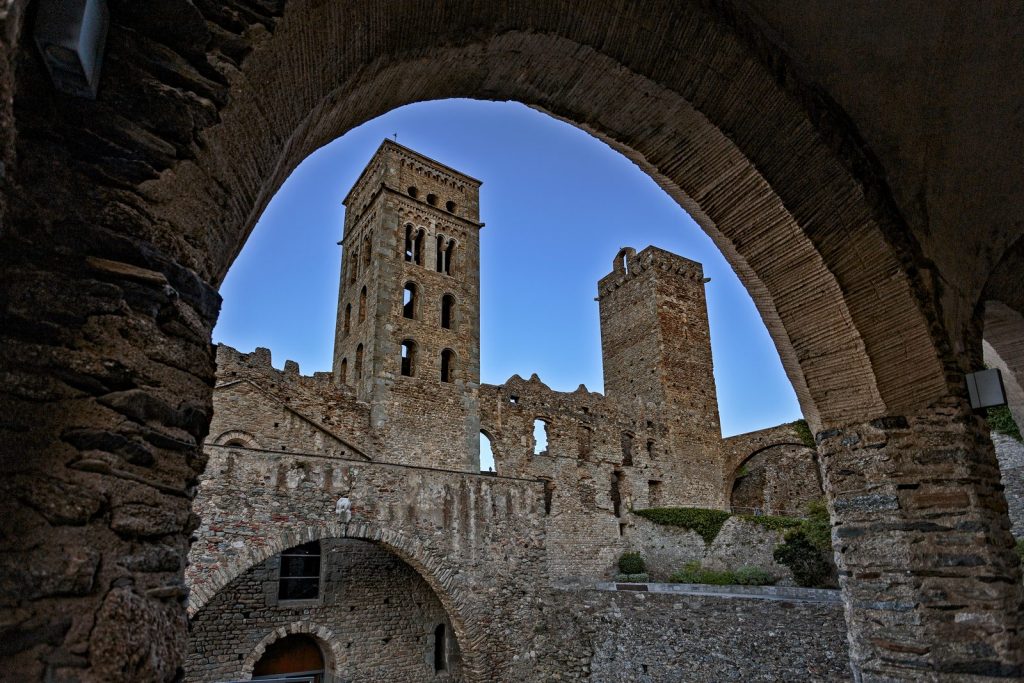 One last look at the monumental buildings, it’s time to head home!

A more detailed story and more photos of the monastery of Sant Pere de Rodes can be found at the link in our blog.
Share this post
Tags: None