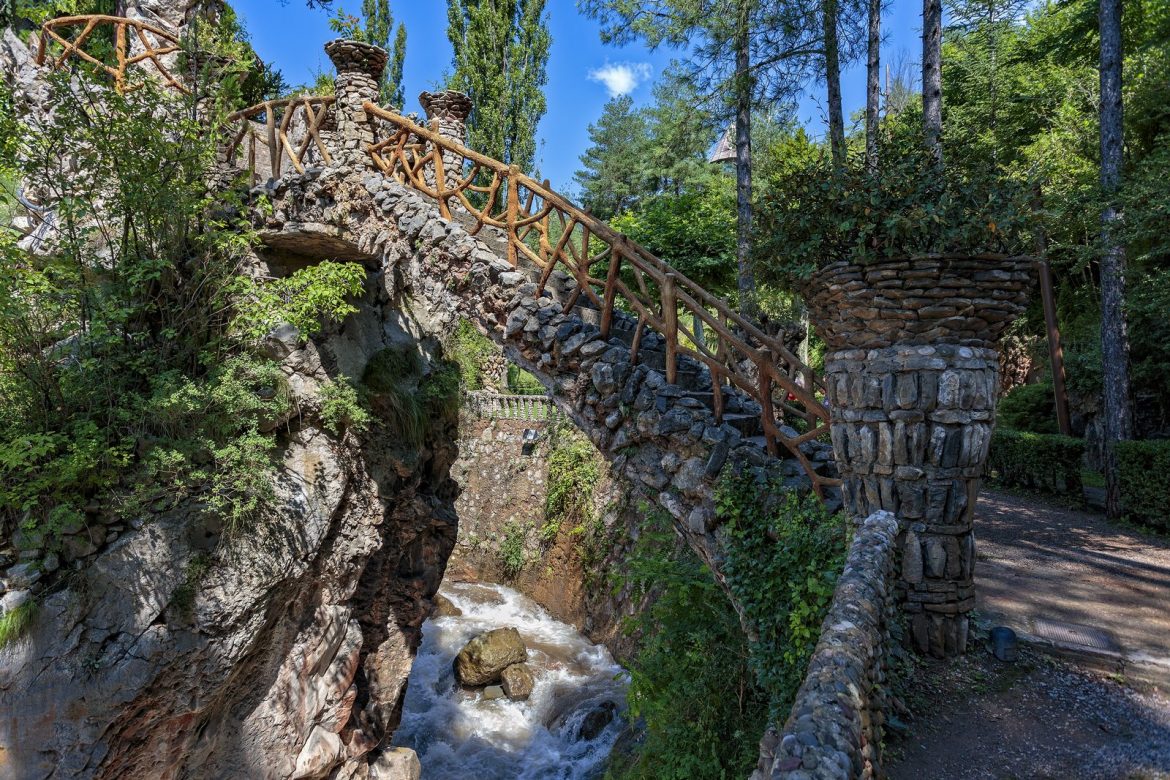 True fans of the great Catalan architect Antonio Gaudi know that his legacy, his works, are not located only in Barcelona, they can be found in other parts of Spain. One of the little-known monuments to the work of the eminent master of form are the Gardens of Artigas (Jardins Artigas), located 130 km from Barcelona in the small town of La Pobla de Lillet in the foothills of the Pyrenees.
In 1905, Gaudi came to the city at the invitation of a local cement magnate to build a chalet in the forestfor workers , working hard in a coal mines for this magnate’s factory (where would you find such a boss these days?). Working on a project to build a chalet in the woods, Gaudi lived in the house of another local oligarchs, the Artigas family, the owners of a textile factory that was very profitable in those days. As a token of appreciation for the hospitality of the owners, or maybe just out of habit to create everywhere and always, Gaudi presented the Artigas with a project for arranging gardens on the bank of the Llobregat river flowing along the master’s house and their factory.
We invite you for a short virtual walk in the Artigas Gardens. 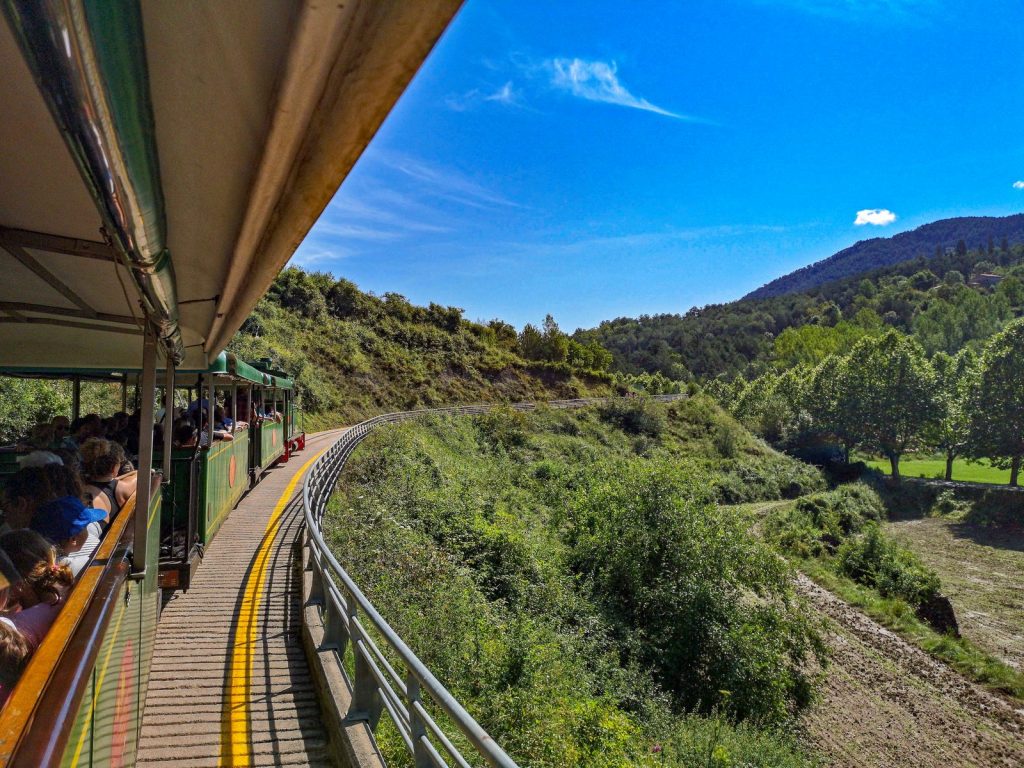 Real tourists travel to the gardens of Artigas on the train of the so-called “Cement” railway, leading from the city of La Pobla de Lillet to the very cement factory for whose workers Gaudí built a chalet in the forest. The train ride is an exciting experience in itself and is a great addition to the visit to Artigas Gardens. 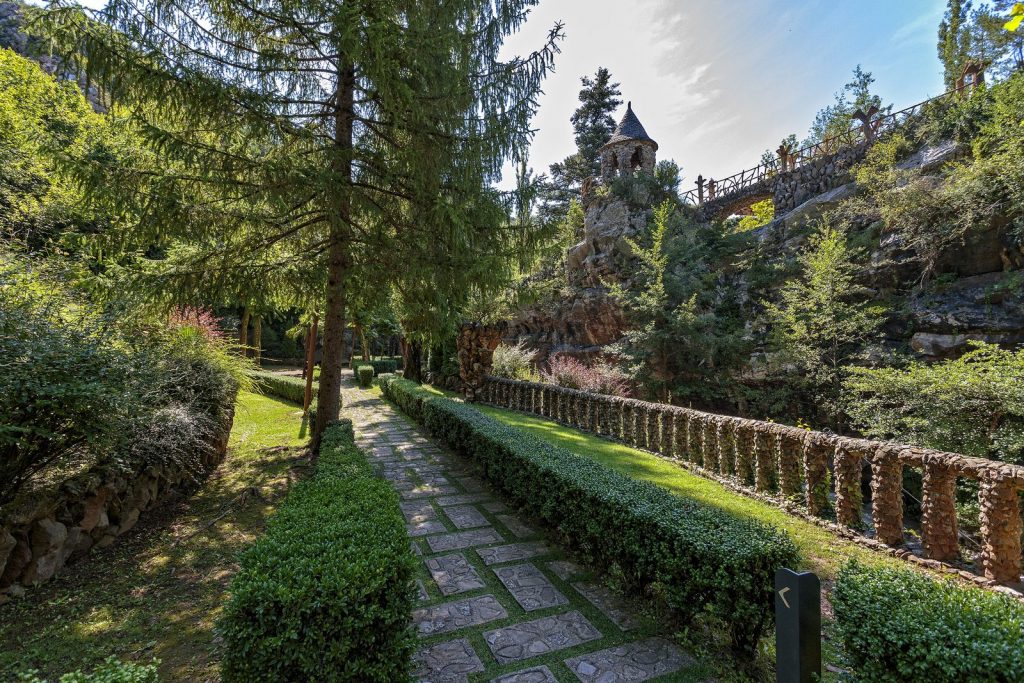 Unlike another famous creation of Gaudí – Park Güell, the Artigas gardens are much more miniature. Another important difference – if Park Güell is considered a “dry” park, then in the gardens of Artigas there is an abundance of moisture. In addition to the Llobregat river, the gardens contain many water sources, skillfully decorated by the great architect, and there is even a small waterfall.
*** 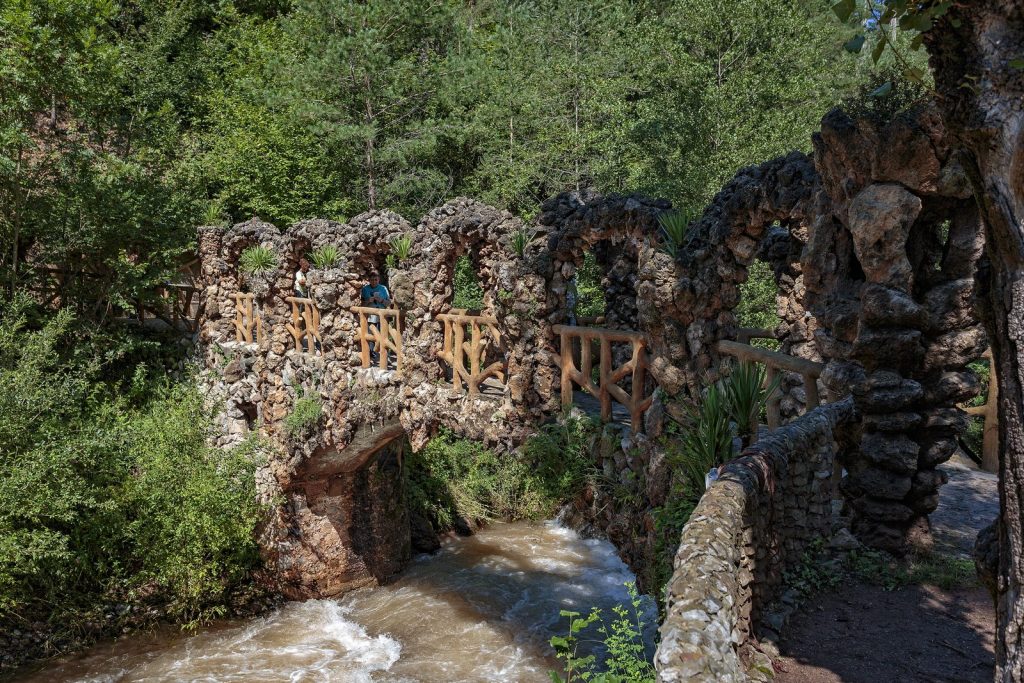 Arch bridge. The day before our arrival, heavy rains fell in the mountains, and the river Llobregat turned into a rapid and seething stream.
*** 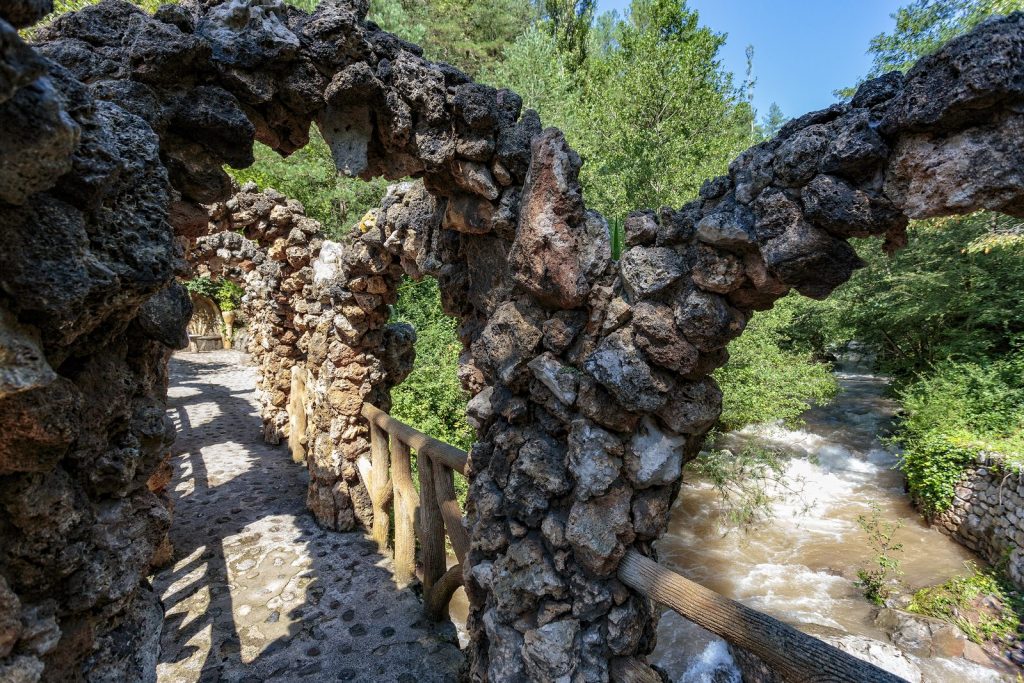 Seizing the right moment, I manage to take a photo without people. In fact, despite the relative remoteness of the gardens, a large number of Gaudí fans come here on weekends.
*** 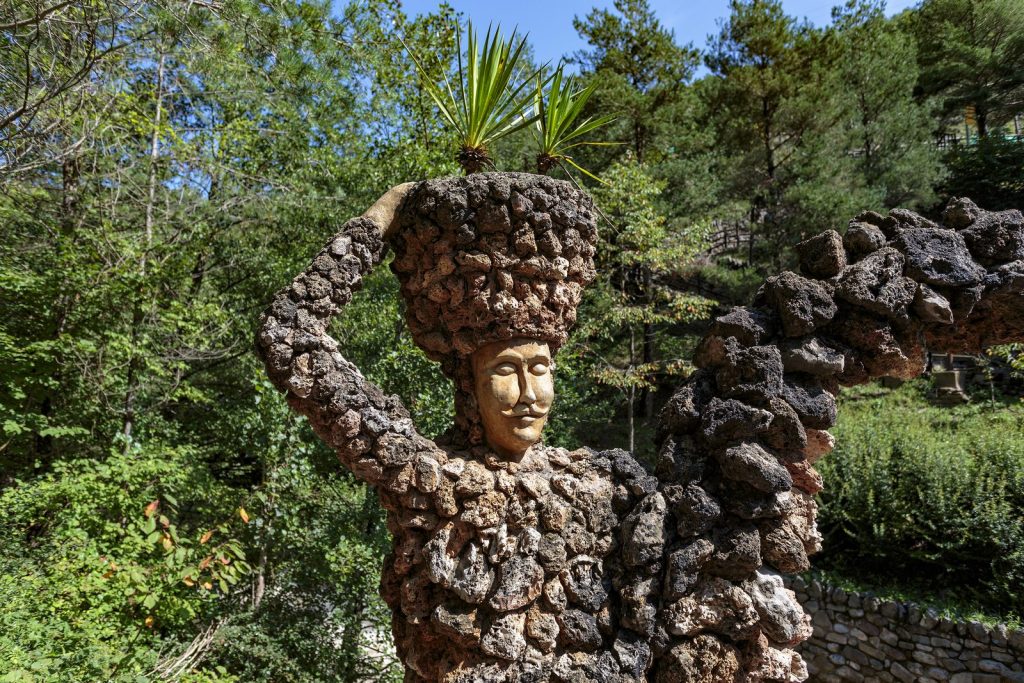 The figure of a man with a basket on his head is at the entrance to the arched bridge. 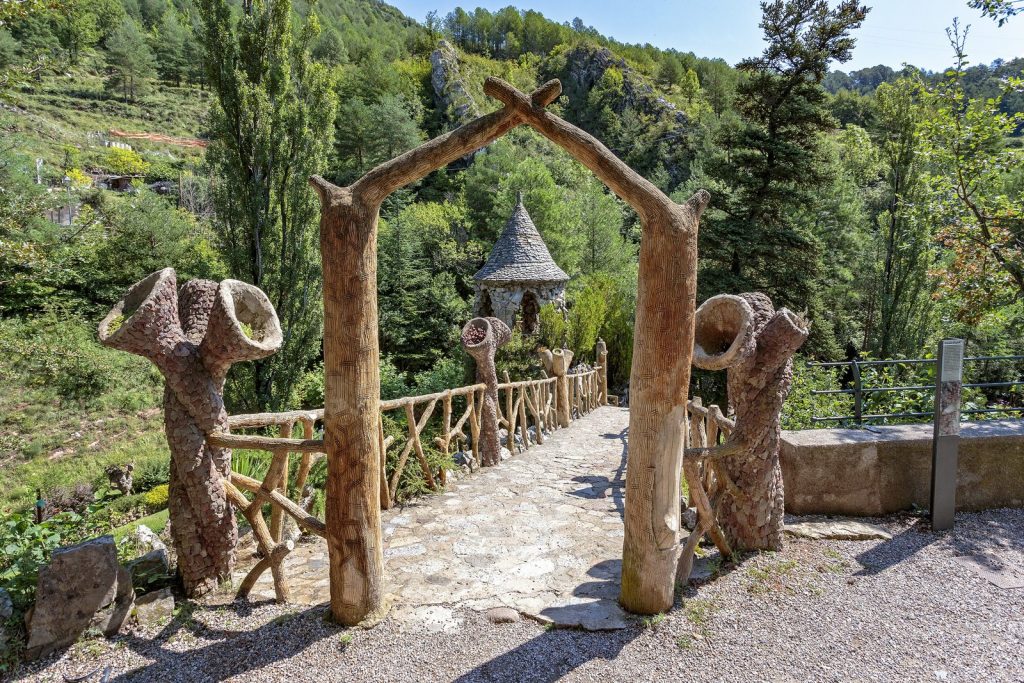 It was here that the original entrance to the Artigas Gardens was located. On the right and left are stylized figures of intertwined snakes, which, according to Gaudí’s plan, were supposed to guard the entrance to the house.
*** 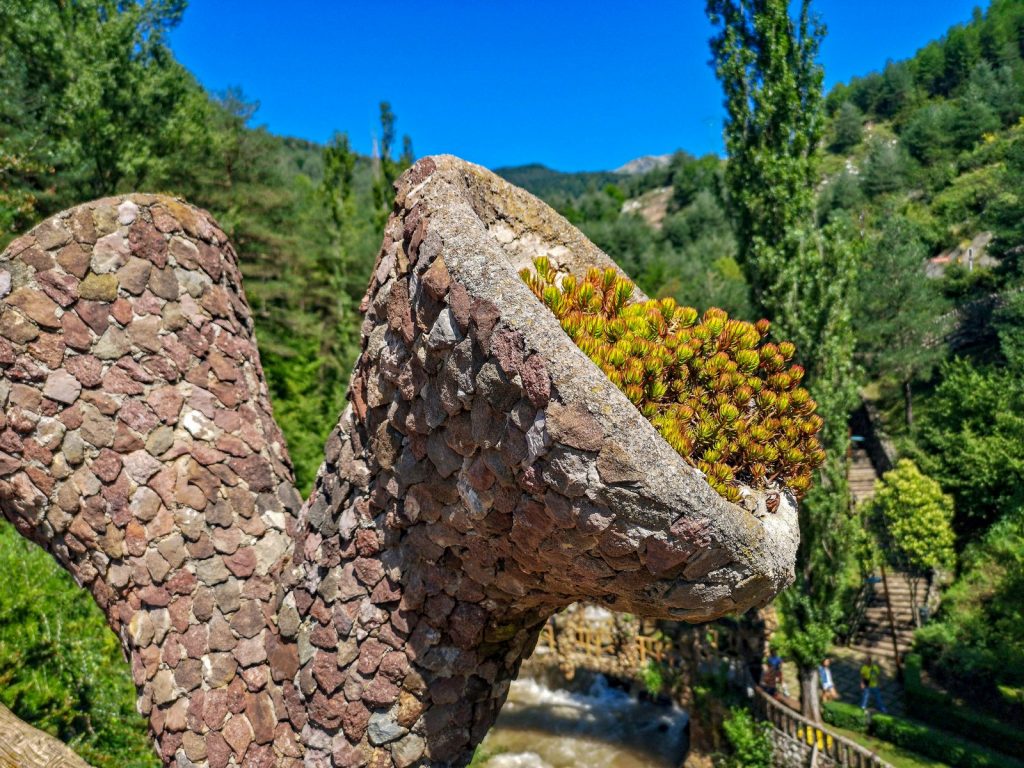 Fortunately, flowers grow in the heads of snakes instead of poisonous fangs.
*** 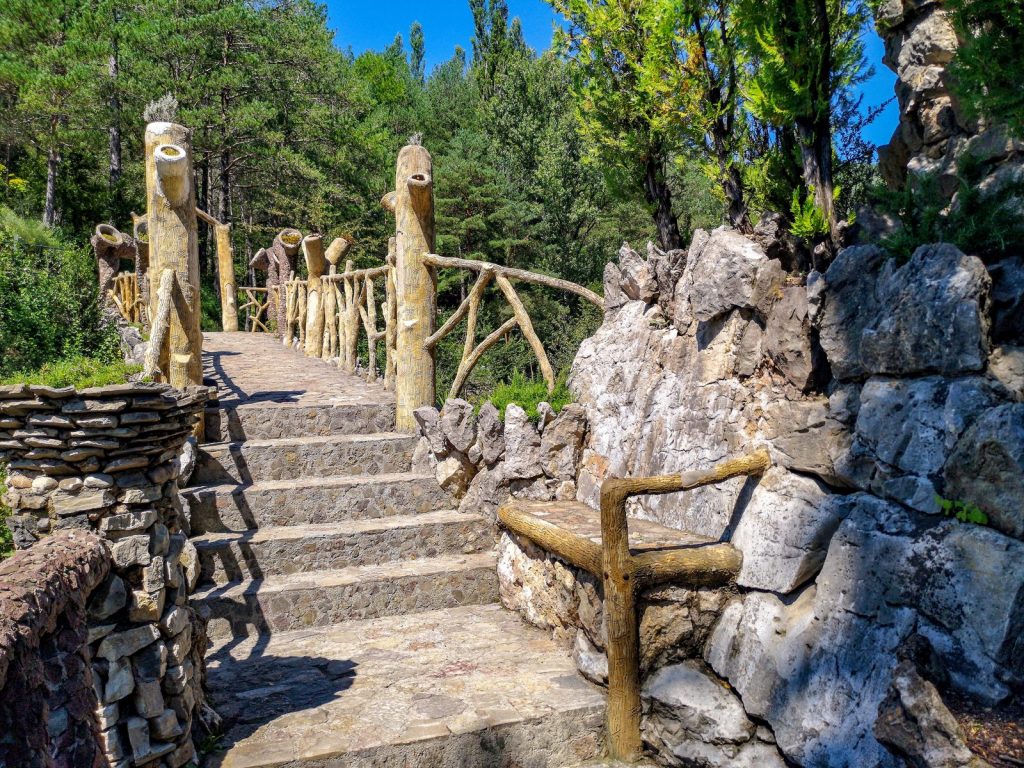 The elements of the bridge and the rest bench are made of wood-imitating cement.
*** 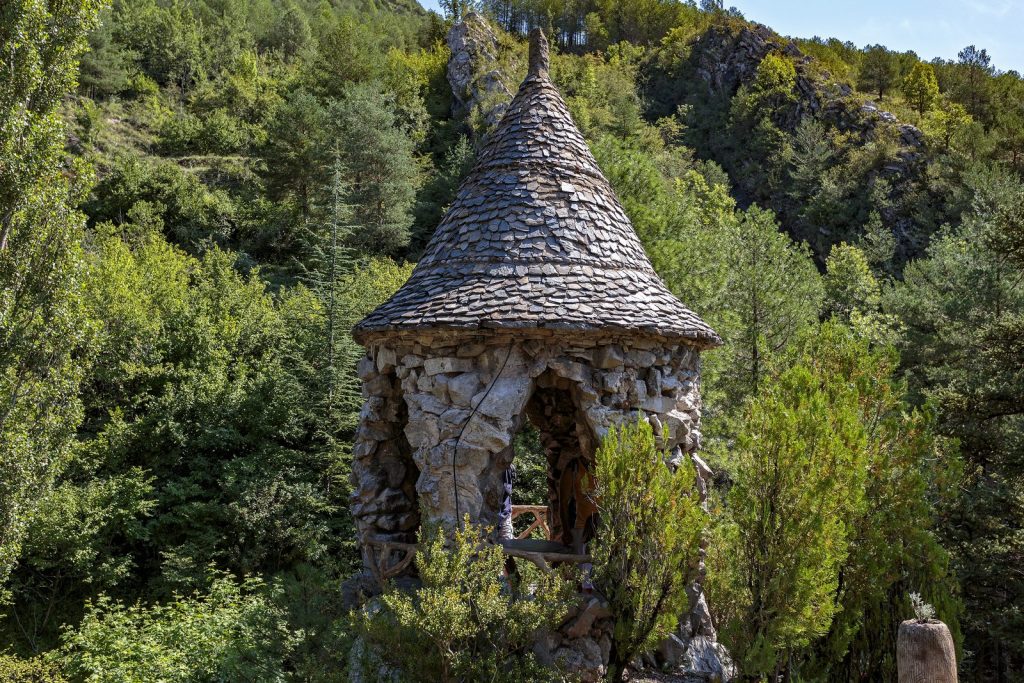 A small observation tower, located on a rock, rises above the gardens. The official name is Glorieta.
*** 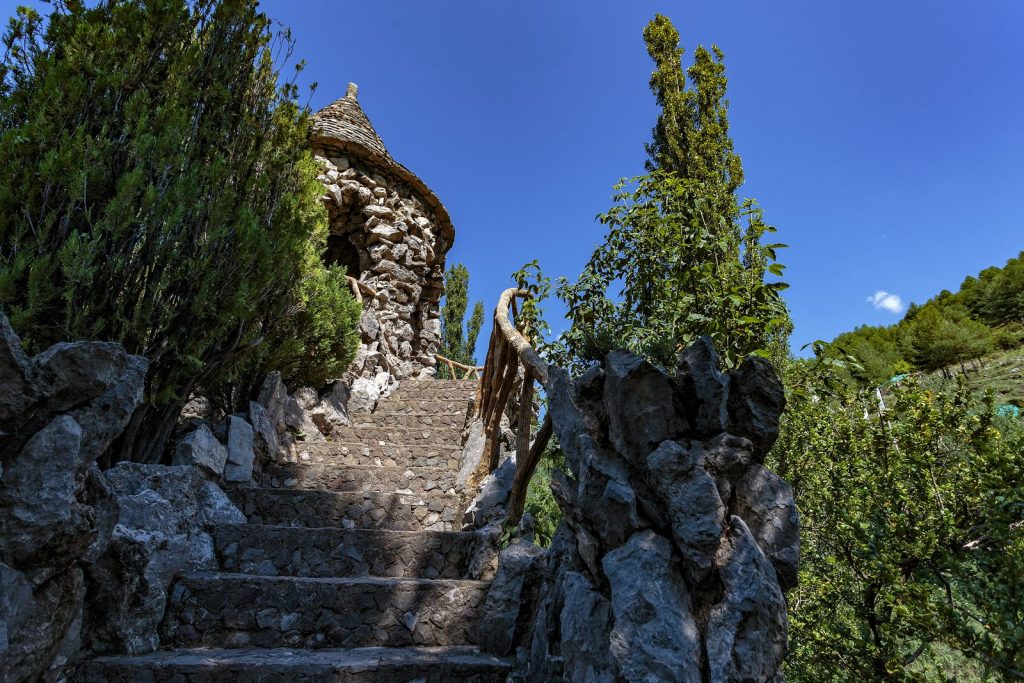 A rather steep staircase leads there. 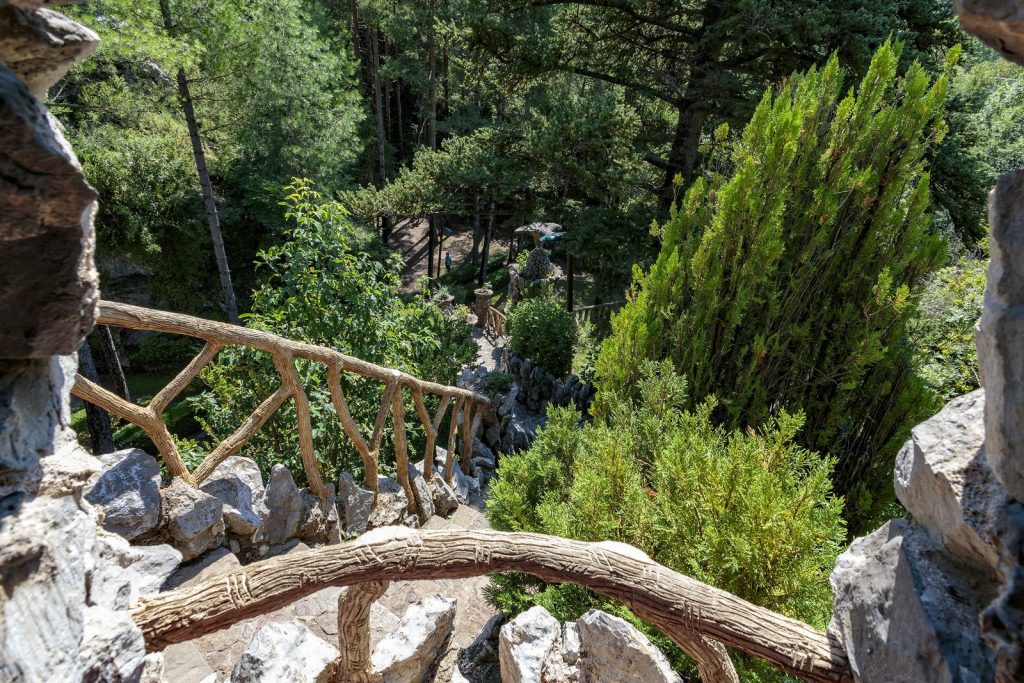 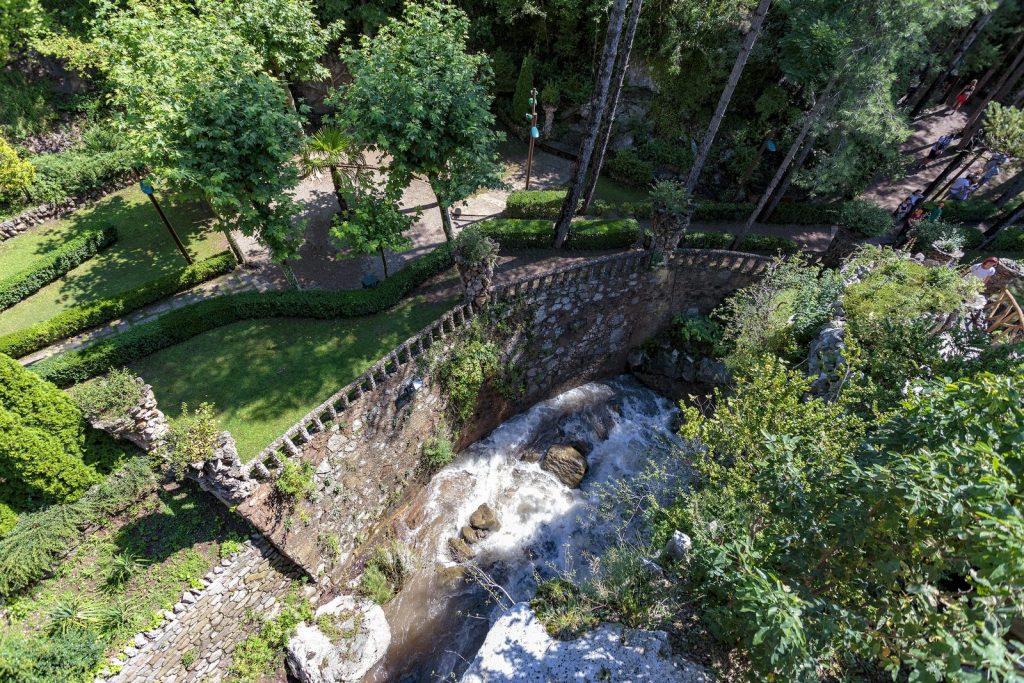 View of the Llobregat river flowing below.
*** 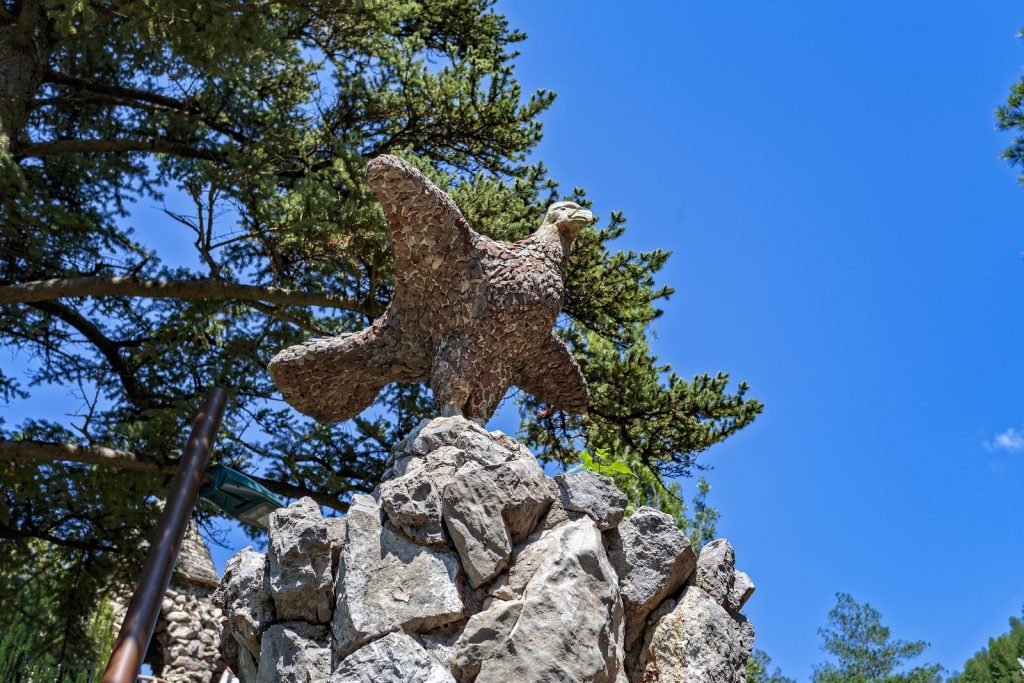 Gaudi in his work often turned to Christian symbols. In Artigas gardens, he used the symbols of four evangelists – St. Matthew in the form of an angel (unfortunately, he has not survived to this day), St. John, St. Mark and St. Luke. In the photo – Saint John as an eagle on the Pont d’Arc Coix.
*** 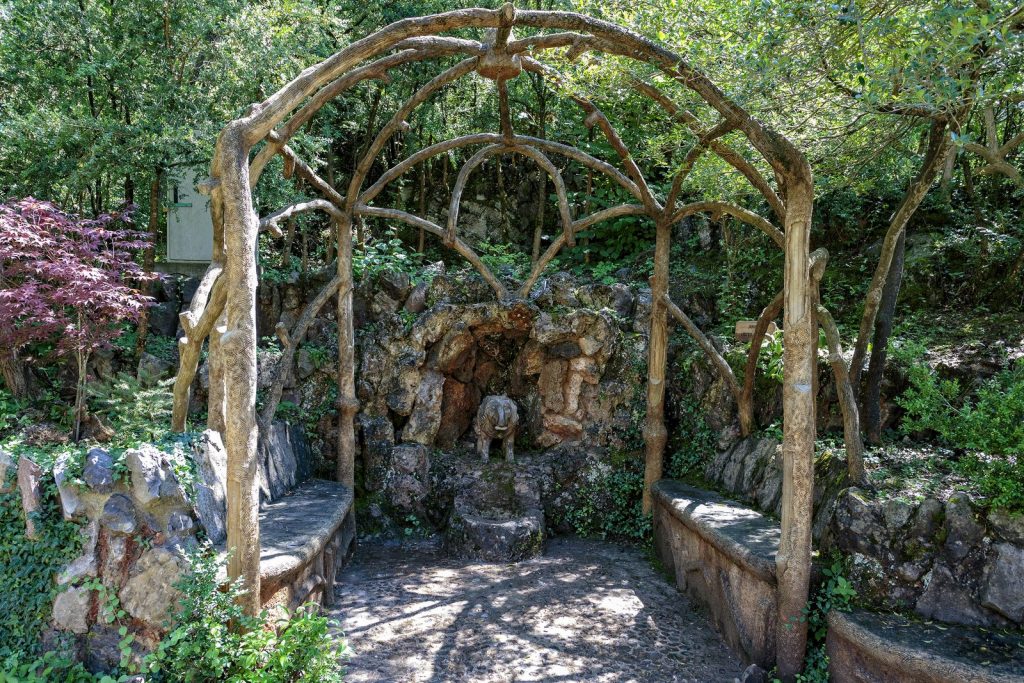 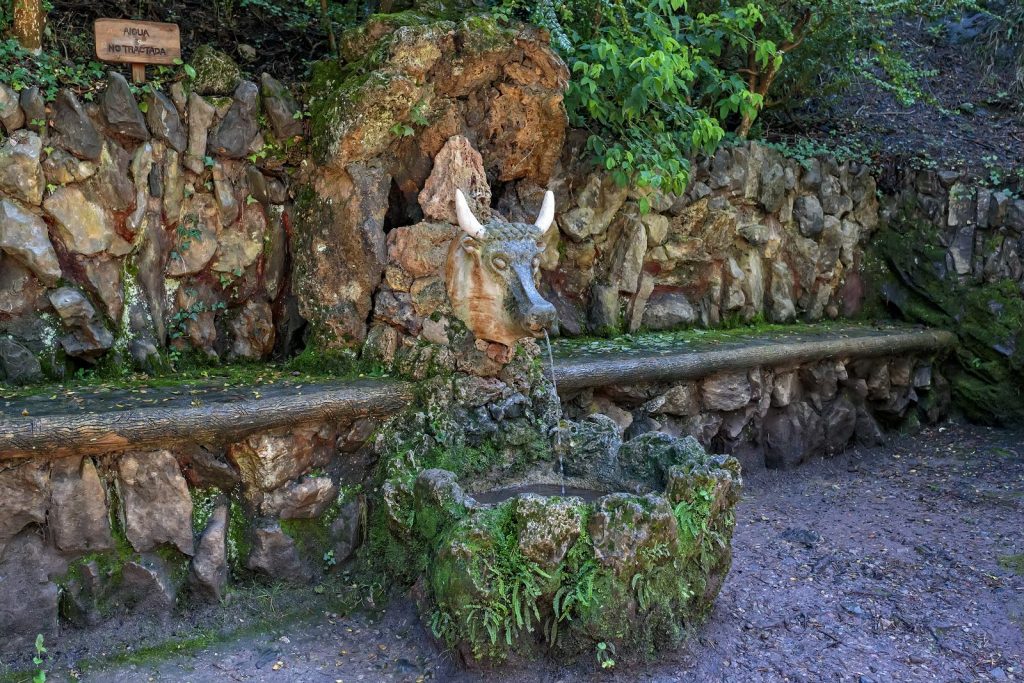 Saint Luke as a bull. 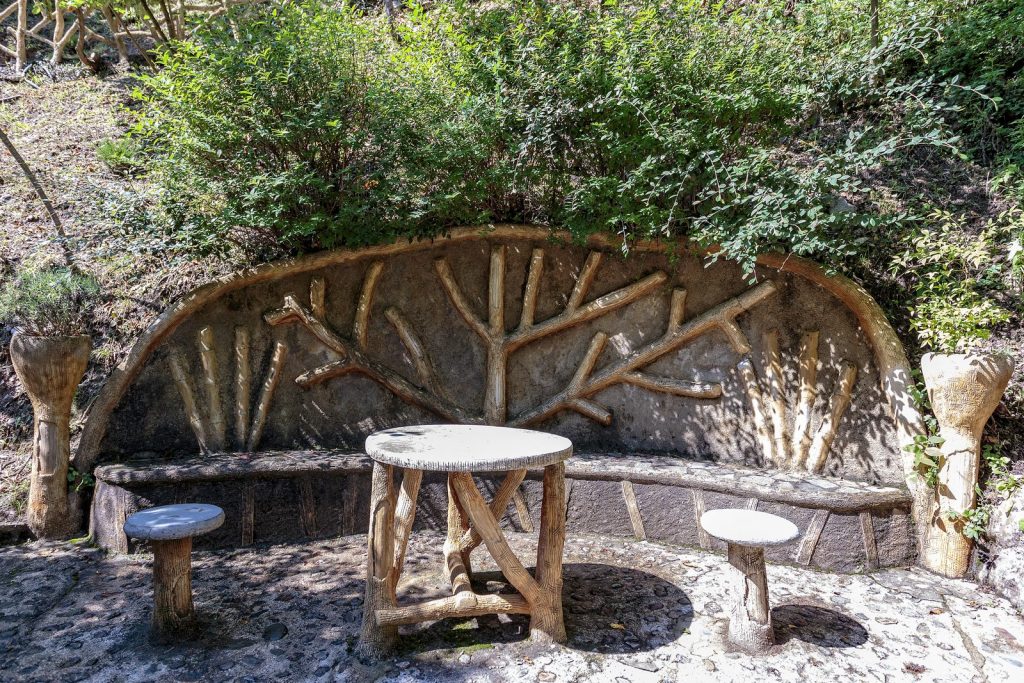 The place where the Artigas family loved to spend their afternoons. The official name is El berenador, translated from Catalan – the place where people had a snack between lunch and dinner.
*** 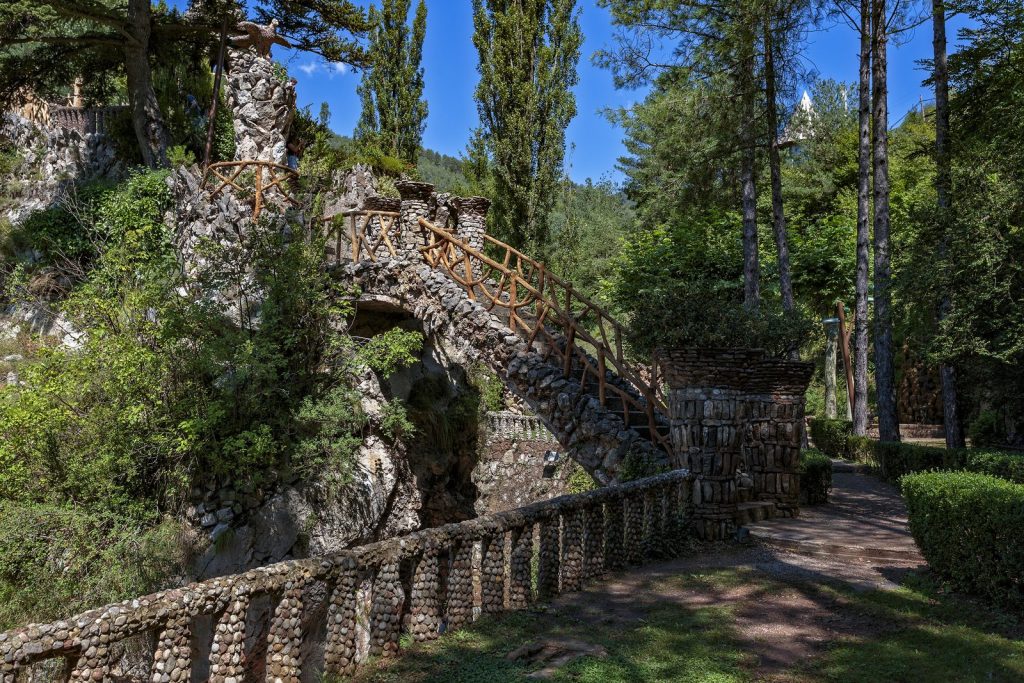 View of the Pont d’Arc Coix bridge. Translated from Catalan – “lame” arch bridge, or unfinished arch bridge. Apparently, it meant that the shape of the bridge is not symmetrical, not complete.
*** 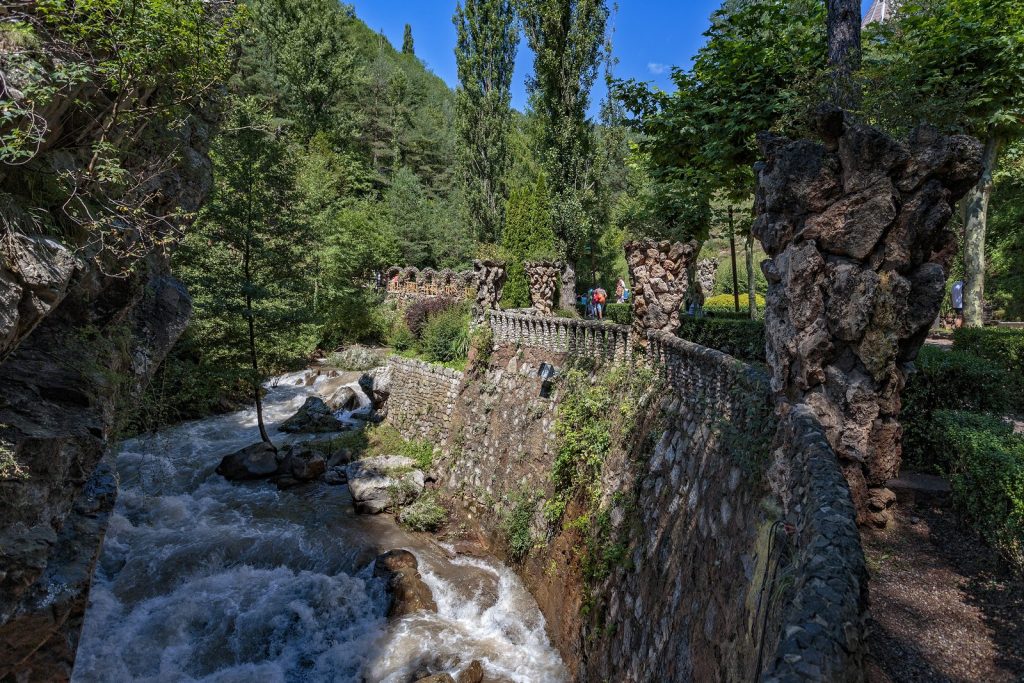 Probably, the Artigas family was very pleased to walk along the shady alleys of the garden on a hot summer day, and in the silence, broken only by the murmur of a mountain stream, plunge into thoughts of the lofty and eternal…
*** 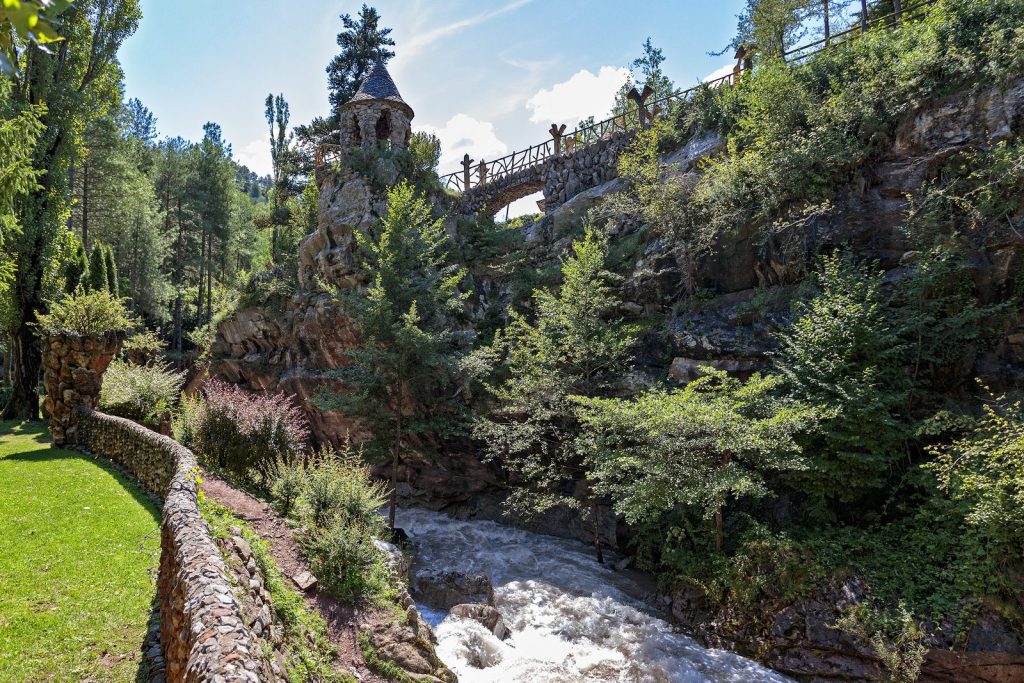 It is hard to believe that until 1971 the Artigas Gardens were unknown to the general public and were in an abandoned state. It is very pleasant that the heritage of the famous Catalan architect Antoni Gaudí has been preserved and restored, thanks to which today we have a great opportunity to enjoy the creation of the great master.

A more detailed story and many photos, as usual, can be viewed in our blog following the link.
Share this post
Tags: None